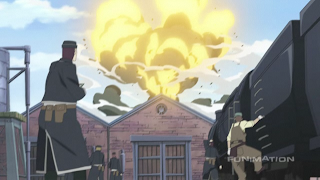 Watch Episode 23 - Girl On the Battlefield

Unlike FMA1, which kept the Ed/Winry romance implications minimal, FMA is taking full advantage of some wonderfully executed imagery. The latest example: Winry’s gently longing touch of Ed’s automail arm as he gets up to return to battle. The mood is soft, and having Winry caress that particular appendage is brilliance for 3 reasons: the automail is her creation, Ed can’t feel anything touching it (no matter the degree of tenderness), and it implies Winry’s understanding of why Ed has to fight (he’s going off to help Al, who led Scar away last episode). Of course, with any good bit of imagery comes the unavoidable overkill – the vocalization of what the imagery has been suggesting up until now. Luckily, it happens later in the episode, but it’s still inferior to FMA1, which never said anything directly, leaving it instead to nervous jokes, great writing, and animation that showed the depth of souls.

Getting back to what FMA2 does best, there is a wonderful bit of a fight between Al and Scar with many joining parties who have a talent for flying in from left field. These include Ed, Gluttony, Ling Yao, as well as ... wait for it ... May Chang and Death Panda! Yes, that eyeless black-and-white abomination of cute/scary returns with a triumphant flying kick. And in addition to her initial surprise about alchemy being used for healing, May Chang shows us another alkahestry-based trick (remote actuation) to very effectively escape a very deadly situation.

FMA2 finally clues Ed, Al, Mustang, and Hawkeye (arguably) into the fact that Fuhrer King Bradley is a homunculus, which is a far cry from FMA1, where characters found out through a chain of relays rather than a one-shot reveal. Also different from FMA1, is the ability to capture/destroy homunculi. A captured Gluttony introduces some very interesting aspects to the “good guys” that FMA1 only dared to introduce amongst some of the more ignoble characters: greed. With each homunculus formed around a Philosopher’s Stone, FMA2 viewers are privy to the squabbling over who gets the stone for their own equally important benevolent purpose. Of course, the mood is light enough to avoid any major infractions on their haloed heads, but the implication is duly noted and appreciated.