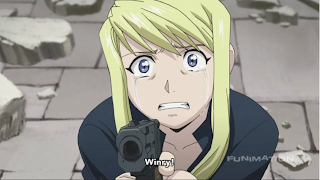 Watch Episode 22 - Backs in the Distance

Continuing the fights from last episode, there is some nice swordplay between Prince Yao and Fuhrer King Bradley, the likes of which were never seen in FMA1.

Meanwhile, we are privy to a flashback to a moment of Winry’s Ed- and Al-less past, specifically a memory of her parents walking away (presumably to the Ishvalan conflict). This is offered up as an excellent juxtaposition with Winry coming to in the back of the Hughes’ car on their way to the cemetery. Its connotation, however, is ruined by a totally gratuitous aside from Winry. This juxtaposition of scenes continues and is used nicely to express Winry’s concern about the dead as well as those still living. FMA1 never employed such techniques except when pointing out the physical trait similarities between homunculi and their, shall we say, inspiration.

Elsewhere, in what might be considered as an inexplicable halt to their fight, Ed, Al, and Scar discuss/rehash what mainly was covered in the original Scar chase from FMA1 and even slightly already touched upon in FMA2. The pause in fighting is realistic enough on Ed and Al’s part, but why Scar suddenly ceases all fury is beyond me and only serves to act like a brick wall for Wile E. Coyote. All is not bad, however, as the banter does serve to humanize/rationalize Scar’s serial-killer motive. Also, the conversation winds around to reveal (conveniently, but not unbelievably) to Winry the identity of her parents’ killer. While nice for shock effect, FMA1 showed the same reveal with much greater drama as it has Winry put together the pieces rather than stumble into a conversation. Besides, hating a criminal is always easier than hating a hero (FMA1’s Mustang). Still, the FMA2’s distraught Winry holding a guilty Scar at gunpoint is totally worth it.

Finally, something Ishvalan. Far from the psychotic lovelorn lunatic of FMA1, Scar’s brother is portrayed more as a rational alchemist blending the alchemic arts of Xing and Amestris. Yes, this means FMA2 watchers finally get some Ishvalan back-story! Ok, it’s only Scar’s back-story, but he’s a part of Ishval, no? FMA2 adds some great dimension to Scar’s angst: anger with his own people (at least a small faction) for going against the will of Ishval and wanting to use Scar’s brother’s research/abilities to fight the Amestrian military at the gates (so to speak).

During the depiction of the invasion of Ishvala, look for the grey animation highlighting naught but the blue eyes of the Armestris soldiers and the blue light of alchemy. A wonderful technique never employed in FMA1...trés effective and impressive! This, if true to the manga, also may have lent to the parallel dimension theory of FMA1, which ultimately led to the setting of WWII Nazi Germany (blonde hair, blue eyes) for the FMA movie, Conqueror of Shambala. It must be also noted here that sympathy for the Polish-likened Ishvalans of FMA2 is expressed via exploding shells in public squares filled with women and children as well as other gruesome wartime scenes as opposed to FMA1’s focus on an Ishvalan family torn apart by the war. In the end, each have their benefits, and each serve their respective series appropriately.

I’ll end by complimenting FMA2 on finally creating an emotional moment between Ed and Winry that manages to emulate the emotional prowess of FMA1. It occurs when Ed inadvertently reminds Scar of his brother (though protective action, and in defense of Winry as opposed to Al in FMA1) and the aftercare/consolation given to Winry. Next week, the two battles continue.