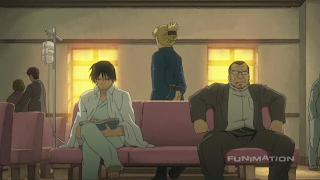 We apologize for the lateness of this article. There was a delay in FUNimation's release schedule for Episode 21, forcing us to delay our schedule accordingly.

Watch Episode 21 - Advance of the Fool

FMA2 Ep 21 tackles early what FMA1...also tackled early? FMA2 still hasn’t clued its characters in on the dramatic irony that is Fuhrer King Bradley, but has gone ahead and introduced the notion that he may be involved with the homunculi. This is accomplished with the aid of Hawkeye and some gasps from the brothers Elric, concurred upon by Mustang calling Bradley “inscrutable,” and eventually leads to the hypothesis that, whatever the Fuhrer-King’s involvement, the homunculi have penetrated deep into the military. Mind you, FMA1 accomplished this with a little more savvy by integrating the Elric’s mother-imitating homunculus as the Fuhrer-King’s secretary and later through the last urgent message Martel ever uttered.

As opposed to FMA1, FMA2 certainly doesn’t pull any punches to protect the supporting cast. Havoc, injured in the last episode, receives a diagnosis that smacks of pure life drama in a way that FMA1 never deemed worthy of the supporting cast. There’s also a small interchange betwixt Breda and Havoc that truly evokes pity for the common soldier.

"Alchemist, be thou for the people," is utilized to humourous extent in this episode (shown, not said) and smartly, too. Whereas FMA1 only used the mantra to rebuild the Amestris’ people’s faith in a seemingly corrupt branch of the military (if not the entire military/government), FMA2 makes a good show of Ed performing good deeds a la montage as a plot device. A goodly usage, and the 8-bit Al in the backgrounds made me chuckle much.

Par for FMA2’s action-oriented course, Bradley gets more fight time than in FMA1, this time in a fight tease/cliffhanger engaging Lan Fan and Prince Yao after learning of their uncanny tracking abilities.

Another battle in this episode (also a cliffhanger), Ed vs. Scar, shows a more strategic Ed who nonetheless seems to also be a bit more reckless. The central difference between the series remains the depth to which Ed and most of the main characters grow (FMA1) versus how well they can adapt through physical confrontations to live (FMA2). Each has their points of valor, but FMA2 suffers more in the long run. Still, we are only at the end of Episode 21, and I am not sure how long this will run, so there’s always room for growth (so long as Ed drinks his milk).