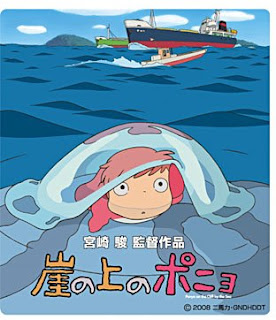 In his last film, Hayao Miyazaki pushed the limits of hand-drawn animation’s courtship with computer animation to produce the visual overload of Howl’s Moving Castle. In his latest, childlike fantasy, Ponyo, he returns to his roots with a new twist: hand-drawn pastel backgrounds that look more like colored pencils than ink. It’s Miyazaki returning to his basics with a simple story, a simple moral and colorful fish.

Ponyo is a tale set by the majestic, busy and tranquil sea, one placed somewhere between Porco Rosso and Finding Nemo. This is a very simple fairytale about a goldfish’s quest to become human and live with her human friend, Sosuke. The mood is like Totoro without the long stretches of silence; Ponyo flows like most of Miyazaki’s works, ebbing and rising between action, wonderment-filled close-ups and visual jabs.

Following the thread of Pinocchio, The Frog Prince, and Ergo Proxy's Pino, Ponyo is a bedtime story about a goldfish who escapes the sea to become human. Her father, a hermetic wizard who pours food coloring through a bubble into the ocean (wizards don’t have many hobbies), represses her, forbidding her to grow up while he tends to his work of saving the seas from man’s pollution. Once Ponyo escapes, she is rescued and named by our main character, Sosuke. Their journeys run side-by-side as Ponyo’s physical transformations are reflected in Sosuke’s internal changes such as coming-of-age, “[becoming] the man of the house,” and saving his mother from a bubble.

Yeah, there are a lot of bubbles in this movie.

The voice acting here is superb. No review would do it justice, so here’s a paragraph fan-gushing. Tiny Fey lends a very cool mom voice to possibly the most casual mom in anime history, Lisa. It’s a very natural and I'm honestly surprised to hea such a brilliant comic actress play such a meaningful role. Lisa and Sosuke are always living in close proximity to each other, waiting for Sosuke’s father to get home from his boating job. Night after night, they are let down. There are great moments of Lisa mom-raging, rejecting her husband, then turning the coin and cuddling with her son to make them both feel better. Liam Neeson play Ponyo’s father, Fujimoto, a wild red-headed magician whose sunken cheeks and blush make him look like a dehydrated drag queen. Not to say that Qui Gon Jin can’t play a dehydrated drag queen! Cate Blanchett plays the Sea Goddess (of course), and her deep voice rolls so well off the character’s lips it’s hard to call this movie a dubbing job. Yes, Disney did cast Miley Cyrus’ sister and a Jonas brother to play the leads, but to be honest they carry the movie beautifully.

Miyazaki has his standard “humans mucking up nature” theme early in the movie, but oddly enough it dampers out quickly since Ponyo is the character who ends up accidentally endangering the world, and only Sosuke’s love can set nature back in balance. The true moral is spoken by the mother and repeated by Sosuke: “We never judge someone by their looks.” Sorry, sleep-deprived sea wizard, will you still be my friend even though you hate humanity?

All Miyazaki preset notions and critiques set aside, Ponyo is simple, colorful, and very reassuring about the loss and (more importantly, the creation) of friendship and setting your own course in the sea of life.

It was quite an interesting experience to see an audience receive this film. The silent comedic moments produced as many warm laughs from the children and their parents as the slapstick moments. Looking around the theater, I saw fathers holding their daughters closer, little girls clapping their hands in excitement, and little boys trying to sneak out to see District 9. What’s really going to make Ponyo a children’s classic is its very specifically targeted audience: children. If nothing else, this is a wonderful film for the mid-twenty-something generation to show to their spawnlings and create a whole new sense of wonderment for the next generation, in the same way Totoro did for many of us.