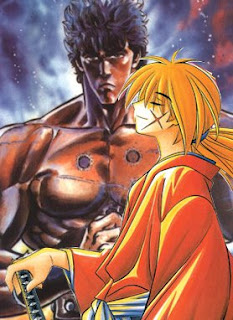 One of my favorite educational experiences at Otakon, due to my inherent ignorance of the history behind anime/manga, was Daryl Surat’s (of Otaku USA Magazine and Anime World Order) panel “Kenshiro to Kenshin: the Neo-Shonen Revolution.” Chronologically, several shonen manga were examined for similar characteristics. Afterward, several neo-shonen (unofficial term... but damned appropriate) titles were brought up as juxtapositions and similarly analyzed. Finally, there was an analysis made as to how and why this genre of Japanese comics, formerly intended for young boys (middle- to high-school), had opened itself up to a more diverse readership and the effect that has had on content.

During the early days of shonen in the 1970’s, the manga category (which means "boy" in Japanese) centered on action-adventure. First and foremost on Surat’s list of shonen masters was Go Nagai (Kiyoshi Nagai), who introduced shonen mech manga such as Mazinger Z (Majinga Zetto). The basic characteristics for the hero of that title, Koji Kabuto, came down to not being pretty but exhibiting powerful, savior-like qualities. While Koji defined the archetypal hero, Mazinger Z was the defining shonen. It was action-packed, graphically violent, and employed feats of nudity no censor would allow anyone under 21 to see today.

Violence Jack (Baiorensu Jakku), another 70’s manga, furthered the extent to which shonen titles would be associated with the first word in the manga's title by offering readers in-your-face violence. More than blood, the action wrought scenes of great graphic detail with internal organs, viscera, and even cannibalism. And who were the victims of such violence? In a word: anyone who got in the way of Jack’s cause (a good one, usually). The slain/maimed would often include animals and even children. Sexuality also played a large part, with equally graphic scenes of depravity (can you say quadriplegic sex slave?) and violence (rape). You know, the sort of thing every middle-schooler has on the recommended reading list nowadays.

It was during the 80’s that change started to rear its pretty little head, but not before Fist of the North Star (Hokuto No Ken) could make its mark. Illustrated by Tetsuo Hara and written by Buronson, FOTNS showcased a hero, Kenshiro, who followed the strong, driven, macho, and violent archetype that preceded him. Women and children were routinely murdered/maimed in the manga, which also came to exemplify the archetypes of villain (Raoh) as well as the villain-turned-friend. During its publication, however, the publisher included opinion cards to find out who was reading, why, and what those formerly anonymous and non-influential observers didn’t like.

In time, this drove the publisher to start changing aspects of the stories/characters in order to gain a broader audience. After all, more readers = more moolah. Nice to know selling-out was never out of style. Speaking of style, the role these cards played was most often evidenced in character/clothing design changes but could also be attributed to bringing minor characters to the forefront as well as replicating trends into other series or later productions/incarnations of existing series. This can be seen in the chronology of designs behind Jojo's Bizarre Adventure as well as in current “shonen” titles such as Dragonball Z and Naruto.

Saint Seiya (Seinto Seiya), however, was the leader of full-on, neo-shonen style, with female leads and off-panel (implied) violence. This brought us to 90’s “shonen,” exemplified by Rurouni Kenshin, where the main hero was more of a pretty-boy (scars are so endearing...*swoon*), with round, expressive eyes; groomed hair; and a non-muscular physique. All the violence takes place off-panel, depriving middle-school-aged boys of any in-your-face gore. The de-evolution of the shonen archetype can truly be witnessed here, as the main weapon of choice is a blade that will not cut (and since the hero is the hero, he’s sure not to suffer that greatly). Chalk this all up as a conscious effort to appeal to females and line the publisher’s pockets with as much reason as possible for continuing to churn out issue after issue.

Surat’s fury over the degradation of shonen into neo-shonen (and ultimately into a category that, preposterously, includes more girls than boys) landed upon 2000-era titles such as Fullmetal Alchemist and Death Note. While he admittedly liked both, Daryl could not shake the history behind their conception. Both are emotionally driven, ruled by heroes with soft lines, and employ violence-free (in-panel) action. To call them shonen seems an insult to Go Nagai and all he inspired. If you ever question this, just take a look around during you local anime con. How many females do you see cosplaying as male characters from supposedly shonen titles such as FMA and Death Note?