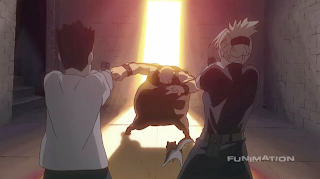 Watch Episode 19 - Death of the Undying

This time, it’s all about homunculi. In an episode almost entirely devoted to these artificial humans, there are bound to be several points to nitpick. First off, the way in which a homunculus is formed:

In FMA1, a homunculus is formed when someone uses alchemy to reproduce life. The resulting creature can hardly be called human, most often resembling an inside-out cadaver. After the abominations are abandoned by their creators (Frankenstein and his monster), fully developed homunculi seek the infant out and nurse it to full health by feeding it “red stones” (possible bits of the original philosopher’s stone or man-made imitations). The red stones, or rather the lives of people sacrificed to make them, serve as the life-blood of homunculi.

In FMA2 there seems to be some differentiation. The basic implementation of the taboo still holds true, but it seems that each homunculus is formed around a philosopher’s stone of their own, which serves as their heart and feeds their seemingly endless regenerative capabilities. The differences in myth, and more importantly how it is described, leaves room for other ways a homunculus may be brought into the “real” world. And from many episodes previous, you’ll remember the “Father” figure, a title which carries a god-like connotation, and one that implies infinite creation possibilities.

The FMA2 homunculus differences are revealed via a rather sub-par battle between Mustang and Lust, which betrays the notion of homunculi as soulless humans by showcasing Lust’s ruby red, stone-cold “heart” hooked up within her body by what appeared to be more like wires instead of flesh. This produces an android-eque visual feel and separates the monsters from humanity a little too easily compared to the intricate emotional work of FMA1 (killing’s always easier if the victim’s not one of your own).

The episode is called “Death of the Undying,” and I hear you asking yourself, “who is gonna get it?” There are three homunculi involved in this episode – Gluttony, Lust, and Wrath – who respectively face off against Hawkeye, Havoc/Mustang, and ... patience. And if it is to be a homunculus that dies, then the differences in the rules of death must also be noted.

In FMA1, the death of a homunculus needed but one thing, physical remains of their “original,” the person the taboo-ing alchemist was trying to resurrect. Sure, an alchemic array to seal the homunculus was all well and good, but if you’re a Mustang or Ed, it’s not entirely necessary. In FMA2, however, it seems neither a seal or original artifact are necessary. One of the homunculi is finished off with, shall we say, nothing but red hot, passionate persistence. Add to this the way “Father” was able to kill Greed, and FMA2 totally destroys the mythos FMA1 built, which is mostly a shame in my opinion.

One of the best things FMA1 did was create a world with finite rules and work within those boundaries. FMA2, ill-content to define/confine itself, insists these supernatural threats are tougher to kill than the average human but ultimately mortal enough to not require the same amount of magic it took to create them. How’s that equivalent exchange, FMA2? All said and done, however, the death that ultimately does takes place is some of the best and most dramatic animation in the series so far, an absolute pleasure to watch in its bold steps to be affective.