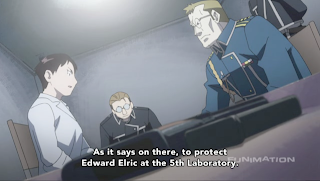 Due to Evan's absence from the Internet for two weeks, this column is a little behind. If all goes well, we will be completely caught up as of next Sunday.

One of my favorite supporting characters in FMA1 is Lt. Ross. She serves as surrogate mother/protective older sister to the brothers Elric and provides an outwardly emotional foil to Hawkeye’s restrained deadpan. Her character manages to bring a large amount of heart to a very minor role. FMA2’s Lt. Ross shared the same sense of worry over the boys via her duty to protect them, but sadly will never get to show us her capacity for a more tender type of care.

I’m beginning to think Josh Whedon is directing FMA2. Having to witness Hughes being knocked-off a second time was bad enough, but it seems that no kind-hearted character (secondary though they be) can be allowed to see the end of the series. Who’s next, Joss? Black Hayate?! Not only that, but FMA2 is also willing to make her go out in a flame of disgrace under suspicion from her fellow officers for Hughes’ death.

And since there’s not a lot to compare story-arc-wise, the other part of my focus this week is on Mustang’s character. True to this episode’s title, "Cold Flame," you will see a much more emotionally disconnected Colonel Mustang as opposed to FMA1’s Roy. Up until and through the current episode, The Flame Alchemist has shown nothing but a calm dedication for duty that almost gives off an aura of bloodlust. FMA2’s Mustang, like the homunculi from this same series, seems at most times emotionally distant to say the least. There is, however, a tongue-in-cheek, emotionally driven motive for most of his cunning. Well, Mustang's cheek, anyway. Other characters love to narrate his motives.

This leads me to believe the outcome of this episode, or at least that of the climax in the alley between Ross and Mustang, could be one of 2 things: 1) a ploy by Roy Mustang to fake Ross’s death to put an end to the military’s pursuit or 2) a portrayal of another victim stuck down in the line of fire between Colonel Mustang’s ultimate goal and his dedication to orders. Both are perfectly acceptable, because they keep the colonel’s emotional state hidden for sake of advancing his prospects in the military. So once more, FMA2 is supplanting emotion with action (killing). But this time it’s off-screen and done to evoke knowledge of an emotional underpinnings rather than portray it to evoke empathy from the audience.