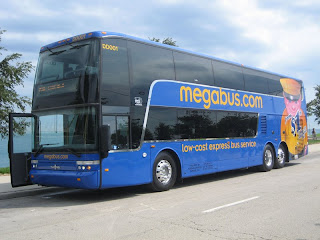 At long last the Ani-Gamers Podcast has woken from its Otakon-induced slumber. Today we've got a mega-podcast (four co-hosts is pretty mega!) that was supposed to be recorded while we were mega-riding the Megabus charter bus service. But since there were so many normal people on the bus, we couldn't record it, and our intrepid bloggers have come together using the power of Skype to send this Otakon 2009 convention report into the great beyond that is the Internet.

Unfortunately, Skype is a fickle friend, so we faced off with such problems as echoes and inexplicable audio dropout. The resulting podcast might not sound as great audio-wise as most of our other episodes, but believe me, it took a lot of work to edit it to a point at which it would actually be listenable. Nevertheless, I hope you enjoy it!

[0:00:19] We've got a lot of people on the podcast today! So many that Skype can't handle the power, and it shuts us out of our conversation again and again. Curse you!

[0:08:40] Break: "Watashi no Kare wa Pilot (My Boyfriend Is A Pilot)" by Mari Iijima (from Super Dimension Fortress Macross) I swear that this is appropriate, because, y'know, Ishiguro directed Macross! Also it was the only Macross song I had on my harddrive at the time. I swear!

[0:09:33] Discussion: Otakon 2009 was awesome. However, there were some problems, such as Daryl Surat being shut down for showing Apocalypse Zero and us getting NO INTERVIEWS AT ALL. Highlights include: Yutaka Yamamoto is a classy guy, the Space Battleship Yamato blowing up the Starship Enterprise, and morse code podcasts. For more information about the guests we saw and the panels we attended, check out the official Otakon website or read Ani-Gamers' continuing coverage of the convention. And finally, that picture of Noboru Ishiguro that I kept talking about is attached to this post.

[1:04:10] We chatter for way too long as we try to plug everybody's blogs and say goodbye. Don't listen to this part. Doctors believe that it actually makes you stupider. (And please do visit the Reverse Thieves and Ogiue Maniax)

[1:09:52] Outro: I've discovered your true identity, Reverse Thieves! By night you fight crime as anime bloggers, but by day, you're really... A BEATLES COVER BAND!