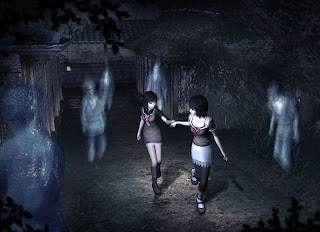 “Survival Horror: Expanded” was a panel at AnimeNEXT that explored all things that go bump in the night (...or day) in the videogame genre of, you guessed it, survival horror. If you’re not familiar with the genre, think of it as being trapped inside the horror movie that made you dread dangling a limb over your bedside as a child, question the inter-dimensionality of closets, and worry about the sounds of breathing coming from underneath your magically protective covers and all too soft underbelly of a mattress.

If there was any structure to the discussion, it was a frame concerning what elements are responsible for qualifying a video game as survival horror. Among the first things listed were “disgusting things” – the slimy, creepy, not-of-this-world walking nightmares we like to conjure up to scare little children into obedience. Zombies, ghouls, and demons were of top mention, but sometimes other genres of these creatures can be more effective, such as warped versions of humanity as showed in such recent games as Condemned, The Suffering, and Bioshock. The absurd and inconceivable/unfamiliar has always frightened the human species, and survival horror exploits that fact.

And since we’re talking video games, it seemed relevant to mention controls and camera systems (points of view). Any camera angle will make the gamer relate to the onscreen character, but as pointed out in the discussion, camera angles such as first- and third-person can have quite different effects. First makes the gamer the character. Your senses are tuned into theirs for the duration of the play, making you the one navigating the danger – having to believe in what you’re seeing in order to advance through level upon maddening level. With third-person, there can be a sense of disconnectedness or vertigo which may make it seem a little safer but, in actuality, results in an over-the-shoulder view that adds to the creepy experience via exclusion – not being able to see behind you.

That brings us to another element of the genre, the unexpected. Whether a survival horror game is based on/in this world (Silent Hill, Eternal Darkness, Left 4 Dead) or some other dimension/world/reality (DOOM, Dead Space), when the things that go bump in the night suddenly jump out into your path and become realized, it reaps a fright. This can be accomplished in many ways – jumpy/jerky movements, sudden light changes, things randomly falling down – and is most notably reinforced by the soundtrack.

While panel and guest favorite in this field was Akira Yamaoka (Silent Hill), it must also be noted that whoever was responsible for the soundtrack to the Fatal Frame games must also be given honorable mention. The former is a master of dark, lamenting, foreboding themes that add a Romantic (scenery as representative of emotional state) element to the game, while the latter relies almost entirely upon ambience and lack of sound to convey the creepiness by forcing a sense of isolation and abandonment upon the gamer. Put into context, this differs greatly from typical American horror, where audio swells build anticipation, because Japanese horror slides the audio in subtly to cause surprise.

But a surprise is just a cheap thrill if the gamer doesn’t have a psychological attachment to the character. Thus the panel also focused on the difference between this genre’s characters’ stories and other games. As noted in such games as The Suffering, Eternal Sonata, and Scratches, the use of flashbacks, story line distortions, and issues of perception trick the player into a sense of increased attention due to vested interest. This investment lends well to another element of the genre, the nature of fighting.

When playing survival horror, one generally assumes the role of a character who is often ill-adept to handle the situation or, at the very least, finds himself/herself having to cope with an extraordinary situation. Thus the psychological element of the game makes the gamer not only fight to stay alive but also to find out how a story came about, if he/she is guilty or innocent, if normalcy can ever be returned. And this is all done by getting involved in the character’s psychological trauma through battles both internal and external.