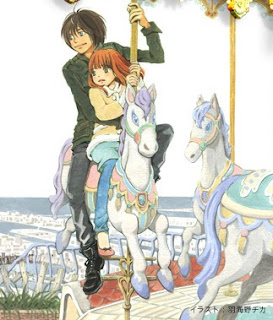 “The abuse of greatness is when it disjoins remorse from power.”

A terrorist missile attack with no casualties. A dangerous conspiracy played by a select few destined to be Japan’s messiahs. A teenager with no memories. This is the setting of Production I.G’s new sure-win mystery/drama called Eden of the East. It begins with a teenager waving a gun, his cell phone, and his genitals at the White House.

With its detail-oriented animation, reserved but likable cast and resolute idealism, Eden of the East is a very refreshing piece that delivers on promises of precision and drama. The series follows Akira Takizawa, an amnesia-suffering teenager unaware of the eccentric game that holds his life, and Japan’s future, in its grip. His twelve-of-a-kind cell phone puts him in touch with a concierge named Juiz, who can apparently hook him up with anything within his ten-billion-yen budget. Unless he or the other Selecao can “save Japan” before their funding runs out, he is dead. Armed with nothing but his confidence, movie trivia, and unbending faith in Japan’s youth, Akira’s begins his journey to take control of the future.

Eden comes from visionary director Kenji Kamiyama, who writes, directs, and creates the project, and who has had a very impressive career even before Eden. He directed the hit action show Serei no Moribito, is responsible for direction, composition, and script for every non-Oshii Ghost in the Shell production, and worked on script and planning on Blood: The Last Vampire. The relatively young Kamiyama has created a powerful cautionary tale about the tragedy of uncompassionate ambition. Keep an eye on this capable and talented story-teller.

Eden’s narrative keeps you in the dark between two central characters, one who is helpless in the world, and one who can save it. Saki is a young computer science student who discovers Takizawa in front of the White House, and her cheerful innocence becomes our view until the Selecao mystery picks up and she is pushed to the side. We follow both Saki’s coming-to-terms with her generation’s mistreatment and Takizawa’s desire to change that mistreatment.

It is typically rather difficult for a series to create amusing supporting characters who do not subtract from the efforts of the main protagonist. Few characters, save for Saki, are outwardly expressive, which is fine since it doesn’t detract from the excellent dialog. Truthfully, Takizawa’s confidence is addictive if not mesmerizing, though his persistent casualness leaves something to be desired. The character design is smooth, though the single-lined mouths seem to widen the faces almost like frogs.

Aesthetically, this is a beautiful series, layered in its lighting and spacious in its complex panoramic view of Tokyo’s metropolis. The shopping malls lie empty and tomb-like, highways are split apart and abandoned, and somewhere twenty-thousand Japanese nerds are without clothing or cell phones. The narrative glides from decadent hotel rooms to missile craters to amusement parks to backstreet slums, creating a concrete unbalance between scenes backed by power and money... and the rest of society. In short, Kamiyama’s scenery itself is crying out for national salvation, for someone to bring about compromise between the young and the old, the haves and the have-nothings.

The opening animation is sharp and dynamic, emphasizing a dichotomy of masculine teal and feminine hot pink splashes of colorful shapes atop the ruins of Tokyo after the missile attacks of "Careless Monday." It bursts and hard-cuts from scenes of destruction to scenes of Takizawa and Saki, the series’ secondary protagonist, with brilliant control. The visuals only enhance the hopeless and yearning opening theme by Oasis, “Falling Down,” which calls for a savior to rise up, a hero to arms, and for the seed of hope to blossom.

A lot of self-righteous idealism about the value of hope in a nation’s youth combine with a fascinating conspiracy theory, great visuals and an entertaining mystery. All these strengths are going to make Eden of the East a huge hit. Especially since two sequel movies are being released this November, and the cliff-hanger ending left us drooling for more, this journey to save Japan may just be starting its road to greatness. And if that’s the case, then hallelujah! The messiah of anime has come.