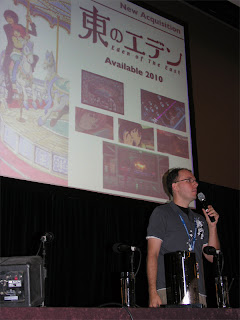 Otakon 2009 seemed to be slightly lacking in the way of major announcements. Bandai blew their big license on Thursday with the surprise announcement of Kannagi, but FUNimation kept their big guns held for their Saturday morning panel. After Adam Sheehan went through the anime distribution giant's most recent titles, he finally got to his three-part new announcement segment.

First was Daytime Drinking, a Korean comedy about... well... drinking, apparently. Then he busted out a new envisioning of an old classic: Casshern Sins, which finished up in Japan this past March. The biggest announcement of all, though, and the one that I was the most excited about, was Eden of the East, Production I.G's new political thriller, which finished in Japan no more than a month ago.

Next, Adam teased us all with the lead-in to a Dragonball license that was not what we hoped it would be. Instead it was the Dragonball Z "Dragon Box," a special edition of the series from Japan featuring the uncut original episodes, each remastered "frame-by-frame." Additionally, the box features the original Japanese episode previews and an 80-page hardcover collector's booklet. The box, which will contain the first 42 episodes on 6 discs, will also automatically default to Japanese language with English subs, which Sheehan pointed out, was proof that the Dragon Box was for the hardcore fans only.

EDIT: Daytime Drinking and Eden of the East will release sometime in 2010. Casshern will hit retailers next year in two 12-episode sets, and the Dragon Box will be out at $79.98 on November 10, 2009.

After that, Sheehan entertained the room with some questions and answers. One of the first pieces of info that we gleaned was that "September sounds like a good month" for the release of the Fullmetal Alchemist Brotherhood dub, though release format (DVD, streaming) was not discussed. On a slightly related note, Sheehan said that we will have an "update very soon on the online status" of One Piece, which has been missing from the FUNimation video portal for about a month now due to online video pirates (har har). Phantom, which has been airing on the video portal as well, will also see a dub and a DVD release in early or middle 2010, though Sheehan seemed to be leaning toward earlier in the year.

Finally, when I asked him about the potential for FUNimation picking up some of Central Park Media's titles (the company went out of business in April), he replied: "We'd love to, we'd love to. There's some stuff that CPM left out on the table that's just great, great stuff. So we're going to be looking at that."

That's about it! Look forward to some more Otakon 09 coverage of a considerably less industry-centric bent in the coming weeks!