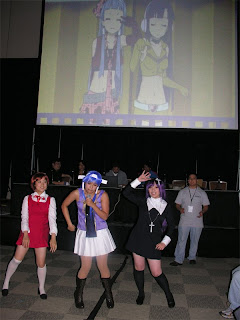 The Bandai Entertainment panel at Otakon 2009 was unfortunately without any licensing announcements, though the huge crowd in the room and the tremendous energy and charisma commanded by Bandai's marketing director, Robert Napton would have led one to believe that a brand new license was coming up. The panel, held late Friday night, was defused in part by Bandai's surprise announcement the day before of the license for Kannagi: Crazy Shrine Maidens.

There was an interesting dub-sub question that came up during the panel. Napton announced that Kurokami, which was streamed and dubbed near-simultaneously with the Japanese version, will see a bilingual release on both DVD and Blu-Ray on an unspecified date. However, Kannagi, which released on Friday, a mere day after the licensing announcement, will not have a dub at all. This was surprising to me, since Bandai had more time to dub Kannagi, and since Bandai dubbed the other two Yutaka Yamamoto-directed shows that they released – The Melancholy of Haruhi Suzumiya and Lucky Star.

However, when asked about the reason for not dubbing the series, Napton had this to say: "It's a different situation [...] Because if you're talking about making something exclusively not at the retail level [...] Obviously, when you're dubbing, it's a much more expensive process, so it has to be more of a mass situation. We're doing something a little more focused." From the looks of it, Bandai looked at similar shows like Haruhi and Lucky Star, and realized that depsite their huge fanbases, they just didn't sell. It makes sense, then, that they decided to focus the release of Kannagi and save money on a dub that would be widely panned by the hardcore otaku fanbase of the show. That would explain not only why there is no dub, but also why the DVDs are releasing exclusively at online retailers for the time being.

On a side note, however, the Bandai press release regarding their Otakon panel had a quote from Napton regarding the potential for Kannagi moving to brick-and-morter retailers later on: "Furthermore, when we do make this sub only version available to the mass retailers at some point down the line it will be the same product for a HIGHER SRP – not less expensive as being speculated, so the obvious inference is to get it for less, get it NOW." It sounds like Bandai is planning to ease Kannagi into the mainstream market instead of shoving it out there and crossing their fingers as they did with Haruhi and Lucky Star.

Other than all the industry inside baseball, there were a few small announcements, mostly pertaining to the many events that Bandai has been heavily promoting. One of their biggest new events is the theatrical screening of the Eureka Seven 'good night, sleep tight, young lovers' movie, which will be seen in "approximately 432" theaters on September 24, 2009. Additionally, if fans show up in cosplay at the event and send pictures of themselves in costume to Anime Cosplay Paradise, they can win prizes from Bandai. The distributor will also hold a "Eureka Seven Day" to celebrate the film's release on September 20th at Kinokuniya Bookstores, in conjunction with the New York Anime Festival, as always.

And as a final note, when Mr. Napton asked members of the audience to "raise your hands if you bought Kannagi in the Dealer's Room today," the crowd of screaming and cheering Nagi fans all dropped their flailing hands. One guy sort of half-raised his hand before he realized that he was the only one. How's that for a visual representation of the pirating problem with otaku?