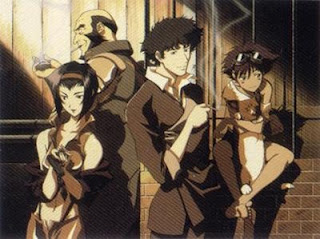 I'm not sure what to think at this point. I mean, it's certainly good. Great even. But Cowboy Bebop seems to have lost some of its kick by the fourth volume. It's hard to pin down, but it feels almost like the episodes have less significance than they did before. The earlier episodes might have seemed like stand-alone vignettes, but they all had an ending that was important. I felt as if the crew of the Bebop had left their mark on the universe, for better or for worse.

In volume 4, Watanabe and Nobumoto seem to lapse into what I can only describe as a filler arc. While most Naruto fans consider "filler" to be tantamount to "Believe It!" on the Kakashi-sensei Evil Words Scale, I'm not trying to say that these are completely inconsequential episodes that are hastily put together without regard for the main story. I just mean that they predominantly serve as meaningless fun. Two of the episodes are backstory-related, but neither provides any very compelling information, as "Ganymede Elegy" did for Jet or "Ballad of Falling Angels" did for Spike. Another has a twist that ties it into one of the characters' backstories, but it mostly serves as a prolonged joke about twentieth century video formats.

Of course, it bears mentioning that this volume also contains the famous "mushroom episode," titled "Mushroom Samba," which is without a doubt the highlight of the DVD. Unfortunately, this eccentric, frenetic Ed-centered story is, despite its high-energy fun, utterly lacking in any sort of meaningful or satisfying conclusion.

My complaints here may seem harsh, but in reality this DVD is still leaps and bounds above most other anime series. Sure, it might be the weakest volume of Cowboy Bebop so far, but that's sort of like being the dumbest person at MIT.