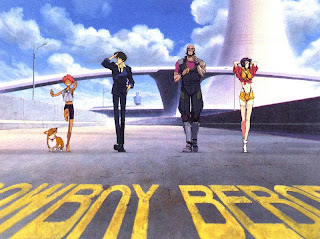 The fun continues as I delve further into the classic nineties anime series Cowboy Bebop. In volume 3, I began to notice something very fascinating about Bebop. Of course, it is clear to any first-time viewer that Yoko Kanno's distinctive music pays tribute to a wide variety of musical styles. One episode, titled "Asteroid Blues," will feature the bouncing beats of the blues, while another, titled "Heavy Metal Queen," will showcase rocking metal music. But what really makes Cowboy Bebop fascinating is that is extends this allegiance to a variety of styles, incorporating it into film-making genres as well.

The first episode on the disc, "Toys in the Attic," is pure horror-movie, with its sparse depictions of a mysterious creature that poisons the ship's crew members one by one, until Spike must face it alone. The next two episodes form a distinct arc revolving around the backstory of Spike and his longtime rival Vicious. In this story, titled "Jupiter Jazz," Kanno focuses her attention on the slow, contemplative sounds of jazz, while director Shinichiro Watanabe and writer Keiko Nobumoto create a film-noir narrative full of sin and suffering. Finally, episode fourteen, "Bohemian Rhapsody," imitates the over-the-top pastiche that is Queen's famous song. The kinetic music serves as a strange – but not altogether inappropriate – backdrop to the light-hearted crime drama that unfolds in the plot.

Cowboy Bebop is never formulaic because, despite its name, it is only occasionally about either cowboys or bebop music. Instead, the show blends different styles of music and film to create an entirely new experience in every episode. Such an approach remains groundbreaking to this very day – not just in anime, but in television production in general.