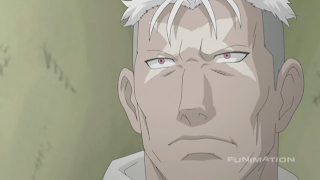 This review will be a bit long in the tooth. Its FMA2 episode skips a rather major story arch that spans 3-4 entirely omitted FMA1 episodes while combining its lessons, sacrificing plot for character development...and it ain’t exactly equivalent exchange. Ready? Steady? Give me good luck!

Ignoring the Wrath sub-plot, FMA2 episode 13 starts off much more parallel to FMA1 than I would have expected, with nearly the exact same train of events concerning the brothers and their newly disbanded but level-footed relationship with Izumi (thanks Sig!). And I have to say that making Ed & Al approach her while she’s holding a knife is a great use of comedy and animation that surpasses FMA1 (though the element of surprise held its own there as well).

Plot-wise the story skews a bit (perhaps compensating for the Wrath plot) here by having Ed, Al, and Izumi discussing “the truth” and what reason could lie behind the proverbial arm-and-leg toll paid by Ed and Izumi while Al lost his entire body and memory. I enjoyed this divergence; it ties in with Shambala in theme and shows the characters are thinking, not just revenge-hungry, one-track creatures. There’s also a little bit of the “messin’ with your younger brother” game, and that’s always fun to watch. Instead of Izumi sending Ed & Al to visit Dante (Izumi’s former teacher) a la FMA1, Izumi says she will ask “someone she knows.”

There is no Wrath plot yet, so the lizard-tailed chimera spotting is done via cutaways to a random scene of said observer. Missing also is the muscle-off between Armstrong and Sig (nooooooo!), the military’s concern over the whereabouts of one of their top “dogs,” the Lt. Archer character development (though FMA2 has flashed to him in a couple of scenes throughout the series), Tucker’s re-introduction (obviously), the raid on Southern HQ, and the whole Dante story.

We step back a few FMA1 episodes to get clued in on the Central-bound transfer of Kain Fury, Vato Falman, Heyman Breda, Jean Havoc, and Riza Hawkeye as commanded by Mustang, which is shorter than FMA1 but ultimately funnier and less serious...an odd turnaround.

Finally! Scar appears, though he is pumping iron while bandaged instead of lying in bed as in FMA1. A scene involving what looks like members of the motorcycle gang from FMA1, leading to the Ishbalan camp by Yoki, seems wonderful so long as you’ve seen FMA1, but all FMA2 viewers have seen of Yoki so far is a picture on a file passed between Mustang’s underlings. More fuel for the fire: The director knows FMA1 fans are watching and is taking good steps to bring in the additional story without directly repeating it. But at what cost? Inference is all well and good, but what if viewers had never seen FMA1? It would seem a very confusing/random scene at best...worst would make it gratuitous (and oh no, no, we cannot have that!). On an inter-series story arc development note, Yoki’s intro takes place about the same time in FMA1 in a junkyard refugee camp dedicated to anyone disenfranchised as opposed to the Ishbalan refugee camp itself.

Also, instead of an ambush at Dante’s, one of Greed’s chimera-minions – Roa (cow), Bido (lizard), Martel (Snake), and Dolcetto (dog) – drops an all too simplistic note into the pile Al is sweeping up in front of Sig’s MEAT shop in order to force the familiar FMA1 hostage situation. On a voice acting note, I adore this Greed. Concerning the animation, I’m liking the explanatory cut-aways and action sequences more so than the character details, which seem too round and lacking in definition.

While most of the Ed-rescuing-Al bit conforms to what we’ve seen in FMA1, there’s a vital difference that I feel wasn’t developed/executed properly. Greed makes his proposition, guised in equivalent exchange, to show the brothers how to make a homunculus in return for knowing how Ed bonded Al’s soul to the armor. Why might this be? It could be a an indication of the divergent homunculi plot...possibly one where the homunculi aren’t out to make a philosopher’s stone, but rather one to create a homunculus army? Ooh, what’s that? Ed enters before Izumi?! Well, that’s all well and good. But then (after Ed arrives), in what could have been fantastic, he goes off on a rant about the emotional toll of having to perform a soul-bonding procedure. I’ll put aside that this series has been severely lacking in the emotions department from the start, but the animation style and voice acting are counter-productive to the meaning behind the rant, leaving the whole thing feeling about 10 times more shallow than Al’s armor. Still, to its own credit, my reaction seems to have been anticipated by a well-placed golf-clap by FMA2’s Greed (not to mention the ensuing battle scene, which, as usual, completely blows away FMA1).

Speaking of which, the battle between Ed and Greed, formerly at Dante’s, begins here...already. I’m not sure how to feel on this one. FMA2 has a quick-thinking Ed concentrating on nothing but how to destroy the villain in front of him, which has an awesome intensity. FMA1 had an Ed obsessed with not taking life but having to in order to save his brother, which is emotionally wrecking. Thank god the two series can live safely inside this one noggin of mine (ours). That prayer aside, I’ll finish up by saying that Izumi’s entrance is much shorter but more straight-to-the-punch (so to speak). And with that, we’re left hungry for Episode 14. See ya’ll then.