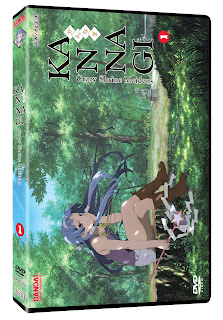 Bandai Entertainment, one of the leading distributors in the North American anime industry, just pulled what some gaming fans might call a "Saturn." For the past few days, advertisements on the sidebar of the Anime News Network linked to a website called omgitscoming.com, which contained nothing but a simple countdown. As of the completion of said countdown at 3:00 pm yesterday, Bandai (who we now know is the creator of the countdown) put up a new page featuring the official announcement of the release plans for Kannagi: Crazy Shrine Maidens. The shonen romantic comedy was a smash hit with Japanese otaku, and is commonly seen as one of the successors of The Melancholy of Haruhi Suzumiya and Lucky Star. (Interestingly, all three were directed by this weekend's Otakon guest Yutaka Yamamoto.)

But a license for Kannagi is not surprising in itself, since the show has a lot of fan support if Internet discussions are to be believed. What is surprising is Bandai's release plan. Their announcement page includes an embedded video of episode 1 from Anime News Network's video service, which is currently hosting the first two episodes and which will presumably host all future episodes. Most importantly, however, Bandai claims that the Kannagi DVDs will be available in stores "immediately." SEGA famously attempted a similar strategy for the 1995 release of the Sega Saturn, but their too-good-to-be-true announcement that the console was already out resulted in severely disappointed sales. I'm not expecting a similar outcome, since anime DVDs and video game consoles occupy entirely different sphere. The distributor hasn't given us the details about the DVD release, but according to the Amazon listing, it looks like 7 episodes per $26 DVD. We'll be sure to press Bandai for more details at their industry panel today (Friday) at Otakon.

And on that note, I just want to say that this is a terrible time to make this announcement. I was unable to post about the announcement when it came out because I was sitting on a charter bus that was thens speeding me toward Baltimore. For countless other bloggers and journalists who were also either on their way to Otakon or checking into their Baltimore hotel rooms, this announcement only got to them later in the night at the earliest. Bandai probably would have gotten a veritable explosion of publicity had they announced this at 3:00 on Wednesday, but instead, they've caught a significant portion of the anime press world by surprise.