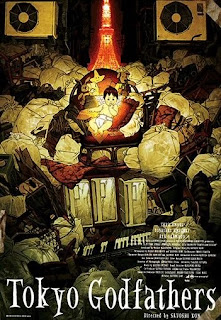 This time we're talking about a movie from Evan's favorite anime director: Satoshi Kon (Paprika, Paranoia Agent). The review portion is sort of short compared to the What'cha Been Doing? segment, which is probably because Evan had to rush to go see Star Trek at the end of the episode.

Our plans for next episode are not yet solidified, but the goal is to record a whole slew of new episodes at Otakon later this month, and to record a Cowboy Bebop episode featuring Evan, Mitchy, and Karl once the former actually finishes watching the show. Till next time, so long, dear listeners!

[0:01:11] What'cha Been Doing? Evan has been watching Cowboy Bebop, reading The First President of Japan, and playing Fallout 3. Also he has NOT been reading the yaoi doujinshi that his uncle accidentally bought him. Mitchy has been playing BlazBlue: Calamity Trigger, BloodBowl, and Battlefield: Heroes.

[0:23:46] Discussion: Mitchy and Evan gush over Tokyo Godfathers for twenty minutes. Highlights of this segment include: a homeless Japanese drag queen, right turns, and Christmas MIRACLES! <3333333

[0:44:02] Links of the Day: Mitchy can't stop laughing at this kid who goes crazy when his mom cancels his WoW account, and Evan is promoting a mini-protest against gender-stereotypes in comics fandom.