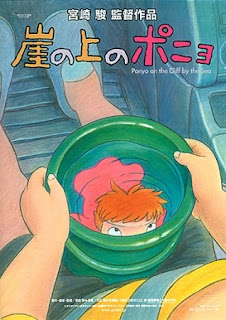 It's been a long time coming, but Disney has at last provided a dubbed trailer for Ponyo, the newest Hayao Miyaki-directed Studio Ghibli (Spirited Away, Princess Mononoke) film released in America by the massive Hollywood studio. Fans who have been paying attention to the movie over the past year will no doubt notice Disney's name change, from "Gake no Ue no Ponyo" or "Ponyo on the Cliff by the Sea" to, simply, "Ponyo." The new name will definitely be easier for mainstream viewers to remember, though I'm sure many fans like myself will still think of it by the original name.

The trailer, available only on the Apple website, showcases the star-studded Hollywood voice cast, which includes such big names as Cate Blanchett, Matt Damon, Liam Neeson, and Tina Fey. And of course, who can forget the contributions of notable relatives-of-famous-yet-insignificant-pop-stars Noah Cyrus and Frankie Jonas? I'm SO EXCITED!!