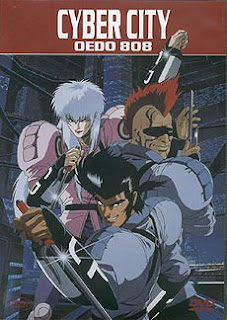 There's something special about OAVs from the late 80's and early 90's. Their blatant disregard of silly things like coherency and decency have made for some epic flops (M.D. Geist) and some verified classics (Megazone 23), but among the pile of crap and quality is an oft-overlooked anime that deftly skirts the line between being great and just plain stupid: director Yoshiaki Kawajiri's Cyber City Oedo 808.

Our story follows three reluctant heroes from (get this) a "cyber city" called Oedo, set in the year 2808. But these heroes are not out to save the world or anything as silly as that. They are "cyber-criminals," sentenced to hundreds of years in space-jail for presumably cyber-related crimes. These unlikely heroes – hothead Sengoku, hacker Goggles (pronounced Gogol), and mysterious androgynous dude Benten – are hired as cyber-police to do the dirty work that the normal police won't do. If they disobey their warden and boss Hasegawa, the collars around their necks will explode, taking their heads off with them.

Obviously, these guys pretty much have the worst job in the world. Giant space-scraper (like a sky-scraper, but bigger) is being hacked into? They've got it. Psychic cyborg is killing random scientists? Make the call. CYBER-vampire is, um, being a cyber-vampire? Bring in the cyber-police! Each of these stories focuses on one of the three characters, resulting in a sometimes formulaic structure that still manages to give each of them a chance to shine.

It is natural to assume that a show like this would have a really silly, stupid plot. After all, I've just mentioned space-scrapers, psychics, and vampires all in one paragraph, and it seems like every word in this show begins with the word "cyber". However, Kawajiri (Vampire Hunter D, Ninja Scroll), known for his testosterone-addled, nonsensical stories and needless violence, manages to make it all work together in one of his tamest anime ever (by which I mean it is utterly devoid of rape). The character developments and twists in each act are relatively believable, despite their often outrageous circumstances. Beyond that, scriptwriter Akinori Endo (Armitage III, Battle Angel) manages to throw in some human drama and even romance among the robots and explosions. These excursions into deeper narratives, such as Benten's brief and thwarted love for a vampire woman, are limited in length and not always particularly good, but they manage to soften the plot enough to keep it from being too laughable.

But now that we're on the topic of laughs, let's go over what really makes Cyber City Oedo such a fun time. As mentioned before, there are cyber-vampires and psychic robots, but the three stories are also riddled with skeleton-controlled-computers, copious amounts of monofilament wire, and even a team of robot sabertooth-tigers equipped with mouth-lasers. Can nothing else make this anime crazier? Well, as it turns out, the kind people at Manga Entertainment, in their quest to gain a higher age rating for the movie, provided viewers with a dub containing hundreds of swear words and even whole plot changes (a dated technique called fifteening). It's truly amazing what Manga did to this movie. Sengoku comes up with wondrous uses of profanity, such as "fuckin' pisser," while all the characters (magically transmuted into double the assholes that they were in the original Japanese) speak with some variety of a New York accent.

For those worried that this OAV's 1993 release date spells bad animation, don't fear. OAVs were able to use more time for development, and less money for distribution, so the top-notch animation and art quality have aged very well, despite the fact that Cyber City is over a decade old. The art direction, which calls up images of Ridley Scott's classic cyberpunk Blade Runner, is also pretty cool, though the costumes scream 90's like an orange-striped neon green running jacket.

Cyber City is good fun, though it is admittedly far from clean. It might have jettisoned Kawajiri's trademark misogyny, but it retains his fascination with hyper-violence, as people's limbs are torn from their bodies and their heads explode. Still, that violence, combined with its relentless and immediate action, provide just the thrill that its target audience is looking for. Any fan of science fiction and/or cyberpunk anime will find much to love in the dirty cyber-streets of Oedo. Cyber City might not be high art, but who's saying that the Mona Lisa wouldn't have been improved by the addition of a couple cyber-vampires?