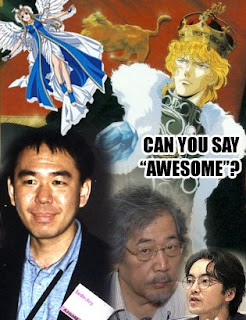 So the title of "largest anime convention on the East Coast" wasn't enough to convince you to attend Otakon? Its reputation as the premier fan-run con just didn't sway you? Well, the Baltimore convention, to be held on the weekend of July 17-19, just might change your mind with a triple-whammy of guests, all announced this evening.

First up is Mr. Noboru Ishiguro, the celebrated anime director whose sparkling resume includes such science fiction classics as Space Battleship Yamato (season one), Super Dimension Fortress Macross, Legend of the Galactic Heroes, the 1980's Astro Boy remake, Megazone 23 Part I, and much much more.

On a related note, anime producer Yukio Kikukawa will also be at the convention. While his list of titles is far more humble (only three according to the Anime News Network), he holds the special distinction of having been producer of 1980's science fiction epic Legend of the Galactic Heroes during its 110-episode run.

The third and final guest announcement to come out of Otakon today is that of Hidenori Matsubara, a character designer and animator who worked on character design in Oh My Goddess. In fact, I am particularly interested not just in Matsubara's character design credits (which also include Gankutsuou: The Count of Monte Cristo), but also in his work as animation director on none other than Rebuild of Evangelion, Gainax's most recent reboot of the Eva franchise.

Three guest announcements on one day, and one of them is an absolute megaton! To be honest, I'm getting more and more excited about Otakon every day. Ink, Uncle Yo, and I will all be at the show, so we will definitely have some interviews with some folks from the fantastic guest list. If you have any suggestions for who we should speak to, drop us a comment here in this thread or send us an email at evanm [at] anigamers [dot] com.

And if you've decided at the last minute that you want to attend Otakon, you still have a few days left to pre-register!