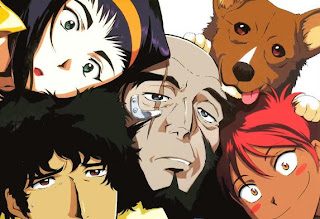 I'm finally watching Cowboy Bebop. I know, I know, it's been a long time coming, but I hadn't picked up the DVDs until a recent 50% off sale in the Best Buy anime department spurred me to grab the classic late-90's anime series. And so far, I love it.

The first two volumes serve primarily to introduce viewers to the characters and standard situations that will presumably define much of the rest of the series, which revolves around a crew of misfits and bounty hunters on the spaceship "Bebop." By the end of the second volume, there has been at least one episode devoted to each member of the Bebop's crew – laid-back bounty hunter Spike, his calm, collected partner Jet, beautiful thief Faye, crazy super-hacker girl Ed, and cyber-dog Ein.

What has astounded me so far about Bebop is that Keiko Nobumoto and Shinichiro Watanabe's screenplay does something that I so rarely see in anime: episodic storywriting. The medium is often defined by its linear storylines, but it can be truly refreshing when a show works fully-formed stand-alone episodes into that framework. That's not to say that Bebop is nonlinear – it is certainly building toward something, but each little half-hour vignette also has its own set of characters whose (extremely well-crafted) interactions lead to a satisfying conclusion that stands independent from the central story.

The animation (part cel, part digital) looks incredible for its time, except for a couple moments on the second disc when it looks like some people in both the art and animation departments took a nap for the day. These few scenes are missing shading or lighting, show specks in the cels (characteristic of earlier eras of anime), or have choppy cel transitions, but then again, these are the exceptions to the rule.

Stop by Ani-Gamers again soon for my next four articles, in which I will briefly chronicle my disc-by-disc journey through this classic anime series.