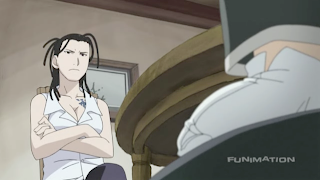 A memory of dear ol’ dad starts us off while on the train to Dublith, but don’t expect any exposition other than Ed mentioning “a dream about him” ...yet. And of course, seeing as the Elric brothers were headed toward their teacher’s (Izumi), there’s no hunt by her for them or any subsequent dragging back as in FMA1. There is, however, a wonderful introduction to Izumi’s hubby (Sig) and quite an excellent introduction for herself, showing that she still carries the strictness from FMA1 but is also imbued with a bit of lovey-dovey-ness for Sig.

Turns out that Izumi knew, or at least bumped into, dear Hoenheim, and Ed and Al immediately reveal him as their father. Shortly after, we are finally treated to some backstory on the the brothers' desertion. Hoenheim was never any part of the backstory for Ed & Al in FMA1, for good reason, so it will be interesting to see how (and when) he’s brought in from here.

Returning to Ed & Al, it must be noted that in the recollection of meeting their soon-to-be-teacher, Grandma Rockbell doesn’t speak as the guardian for the brothers. Strange for a series stressing the building of bonds and duty. Also of note, the flashback to Ed & Al’s “provisional training” does not take place between the brothers on the island where they are stranded a second time, but at the dinner table with Izumi. The curious thing about not stranding the brothers on the island a second time is, of course, that we aren't privy to Wrath’s introduction – this episode's defining difference from its FMA1 counterpart.

The events in the flashback are mostly the same, with the exception of the absence of one of Izumi’s assistants scaring them about the island. I’m actually glad about this: the whole “madman on the island” thing always seemed a bit unnecessary, and FMA2 whittles down the island experience to exactly what it needs to be. The reason behind the lesson they were supposed to learn on that island also comes a bit more believably to the young brothers of FMA2, albeit via some classic hokey Warner Bros. Al-into-meat, ants-into-bonbons schtick.

FMA2-exclusive insight into post-provisional training is done really well, with the evolution of Izumi mentioning the words, “the truth,” a sudden flashback to “the gateway,” and a realization by a quick-witted Ed. A resulting confrontation/query brings to light to Izumi the facts about what Ed & Al have done. Her reaction is not as violent as FMA1 and more sensei-ish, almost Zen in its haplessness. Next we are treated to Izumi’s taboo and relevant backstory, which is good for brevity but forsakes all the emotional trauma of Ed & Al discovering how she’s wrecked herself as well as all the anger they had for her keeping it hidden. Instead, Izumi asks “Guess I should have told you sooner, huh?” Bah. No, Izumi, you still shouldn’t have told them. Still, I must admit, the embrace between Izumi, Ed, and Al is one of the best emotional moments so far in FMA2.