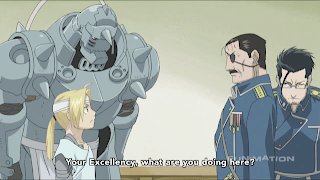 With the return of FUNimation's video service, Ink has been able to resume his Brotherhood Diaries series once again. The two missing articles will be posted today and tomorrow respectively, leading up to the latest article (12) on Sunday.

At the start of this episode, we get our first prolonged glimpse into FMA2’s depiction of the Ishbalan rebellion. Ishbalan skin is noticeably darker here than in FMA1 (a little more medium brown than medium tan) and the Ishbalan faces seem painted more with a determined military might as opposed to FMA2’s reactionary angst. A voiceover by Mustang soon clues us in to whom this reflection belongs and quickly explains his Fuhrer-ambition as one dedicated to helping all those beneath him – “naive idealism” as Hughes calls it. This is a replacement for one of my favourite scenes in FMA1, one between a sullen, drunken Mustang and apple pie-bearing Hughes, which perfectly shows the bond between them and the maddening effects of war. FMA2’s version seems lacking the emotional (holding true to form for this series so far) while emphasizing duty.

Hughes and Armstrong are still in on the revelation of homunculi/symbols from Ed’s fight in Lab 5, but the Fuhrer bursts in as opposed to the FMA1, where he is visited by Hughes directly pertaining to vague aspects of Ed’s Lab 5 report. Fuhrer-King Bradley also seems less of a threat in FMA2, less commanding (funny seeing how jovial his FMA1 persona was), which I chalk up to the voice acting and animation rather than the script. Also, to great disappointment, the Fuhrer's “secretary” isn’t introduced. Plenty of time for a good introduction though, so I’m not worried.

A major difference is the reason for the Elric's trip to Dublith. In FMA1, it was a lie in order to track down Scar at an Ishbalan refugee camp. In FMA2, Ed & Al earnestly want to visit their teacher because they feel something to be lacking (nice touch, FMA2!). I’m not necessarily complaining though, because never before have I been so enamored of a character enthusiastically crying “take me, take me, take me” than when Winry discovers the Rush Valley stop. And on a backtracking note, the deformation integration has thankfully gotten much better over the last few episodes.

A character-building area where FMA1 was a little slack (but still damned effective) is rectified in FMA2: the bonds between those in the Hughes family. And if you’ve watched FMA1, you know why that’s of grave concern. So the writers had the ability to build character after all! This adds credit to my notion that FMA2 is written knowing full-well that lovers of the old series are watching and helplessly, automatically transferring their character knowledge over to this new series. That said, when the climax to Hughes’ involvement in FMA2 comes, it is with a jerk rather than FMA1’s ballet-like choreography. The impressively convincing portrayal of his initial Lust-inflicted injury makes his getaway seem unbelievable (in a bad way) in comparison, and the fact that we don’t see a transition between indoors and out lends to a disorientation unbecoming such a grandiose moment.

On the flip side, the knife-through-the-forehead paralysis of Lust is wonderfully parallel to what Lust does to Wrath in FMA1. There is a more elegant saving grace, though, which lies in the depiction of Hughes’ hesitation to kill his “wife,” which, as fantastically as it is executed, only lasts for a moment. Hughes' death, however is a mixed bag because it lingers; the parts that involve no dialog are fantastic, but once Hughes is giving his deathbed speech it feel like a corny soap opera. This is not at all unexpected, seeing as FMA1 fangirls everywhere mourned his loss, wore black until the end of the series, and probably called FUNimation for a post-election recount.

Hughes’ funeral is just as beautifully handled as FMA1 (coffin-carrying visuals were actually better in my opinion), but curiously lacking in emotional punch. Watching both series, FMA2 then FMA1, I have to say that there’s just something about pulling heartstrings that FMA1 nails. It might be the weaving. Characters and story lines in FMA1 are almost sporadic, but recurring, and as such form associations and relationships to the viewer, other characters, and the story line that FMA2’s block-ish/rushed story abandons for sake of plot. Not a bad thing, necessarily, unless you find yourself comparing two pieces of art (everyone hates a critic). To FMA2’s credit, however, the post-funeral grave-side chat between Hawkeye and Mustang is brilliant up until Hawkeye isn’t as quick on the pickup as in FMA1. Mustang, however, is just as astute as his FMA1 counterpart and even manages to surpass him in the pontification department by a smidgen.