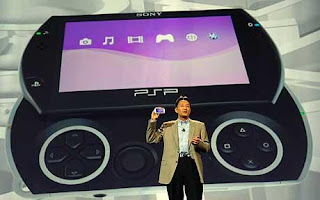 Ah Sony. The former industry leader, now reduced to a lumbering giant with the technical brute force to be the best, but apparently without the marketing know-how. Their E3 press conference was, at long last, not really about hardware. The PS3 has long been criticized for being too expensive and too hard to develop for, but most importantly, its game lineup has been... disappointing at best. Sure, there were some hardware announcements, but Sony really wanted to tout their exclusive franchises, as if to remind us all that the Playstation is still holding strong against market adversity.

The biggest announcement of the conference by far was, of course, Final Fantasy XIV Online, announced merely a day after Microsoft rubbed into Sony's face the fact that FFXIII would no longer be a Playstation exclusive. Not to be outdone, Sony announced Final Fantasy XIV (trailer here), an MMO sequel to XI, also an MMO. The game will be a PS3 exclusive when it releases in 2010. That all sounds well and good for Sony, except... wasn't FFXIII a "PS3 exclusive" for a while? Well, that's not the case anymore, as of last E3's announcement. Who is to say that E3 2010 won't bring an announcement of FFXIV's move to 360? Then what? Sony's key franchise will have been utterly usurped!

Speaking of usurping key products, Microsoft announced their own motion control technology the day before Sony's conference, meaning that the functionality is now present in two of the three major consoles. Sony's answer? A modified version of the Playstation Eye camera, paired with a "wand" of sorts with a glowing tip that changes colors based on context. The motion detection in the Eye senses the wand's tip, creating one-to-one movement. Even more than Project Natal, this new "wand" seems to be a direct stab at Nintendo. The idea of a "magic wand" is sure to resonate with casual players, but I think that it has neither the originality of the Wii nor the technical evolution of Natal. Still, the technology looks like it works pretty well, if the tech demos are to be believed. And Anton, the rep demoing the wand, voiced one of my concerns with Natal when he took a small stab at Microsoft's product: "There's really no way to do this without a trigger. It just wouldn't feel right." A valid argument for the wand, which seems at first glance might seem like a step back from Natal.

If there are three franchises that can maintain the Playstation 3, they are undoubtedly Final Fantasy, Metal Gear Solid, and ICO. Sony already showed off Final Fantasy XIV, and the Metal Gear news is mentioned below, but they also trotted out some new footage from The Last Guardian, the latest game out of "Team ICO." The in-house studio behind ICO and Shadow of the Colossus unveiled their newest game, which fans called "Trico," a few weeks ago, but Sony didn't hesitate to bring out new footage at E3, and make it clear that the Playstation 3 is the only place to experience the game.

Kaz Hirai called it "the worst-kept secret of E3," which is quite honestly not something to brag about, but that's beside the point. The PSP Go is... well, go! The second redesign of the console will differ from the PSP 3000 just as everybody thought it would – it has no UMD port. The console will run only downloadable games, meaning that Sony is now planning on offering all of its games through digital distribution. (Not exclusively, though. They promise to promote PSP Go and PSP 3000 as equals, just like Nintendo did with the DS and... Gameboy. Oh. Right.) Other major features include 16 gigabytes of memory, slide-out controls, and a price tag of $249.99. The new portable will be out on October 1 in North America, and November 1 in Japan.

Hideo Kojima had another new Metal Gear game to announce, after having teased 360 players with the new Raiden game Metal Gear Solid: Rising just a day before. This time he was announcing a PSP game, Metal Gear Solid: Peace Walker, the account of Big Boss's creation of "Outer Heaven." The somewhat tongue-in-cheek trailer shows four Snakes, leading me to believe that the game might contain four-player co-op (or just a crazy, clone-ridden plotline). And to satisfy Final Fantasy fans on the PSP, Sony finally announced that FFVII would be available for download, starting at the moment of the announcement.

In terms of other games, Sam Houser from Rockstar Games got up on stage during the presentation to announce what he calls "the ultimate action game," an action-adventure set in the 1970's called Agent. The game is exclusive to the PS3, but no other information was given. Sony also announced Gran Turismo Mobile will hit stores on October 1 to tie in with the PSP Go launch, and Gran Turismo 5 was announced but not dated. Finally, Mod Nation Racers, a LittleBigPlanet-esque customizable racing game, was announced alongside its less casual racing brother.