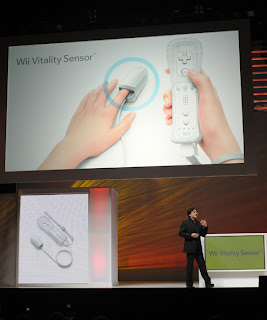 The Nintendo Press Conference was not quite as action-packed as the Microsoft one, since they've already used up their quotient for earth-shattering motion control announcements. Instead of motion control, however, the console manufacturer and game publisher announced a new "Wii Vitality Sensor," which will attach to players' index fingers and track their pulses. Why? Well... nobody's really sure, though Nintendo President Satoru Iwata suggested that "games have been used for stimulation, but maybe it won't be long until games are used for relaxation and even to fall asleep." So Mr. Iwata, your console's game library is practically putting me to sleep as-is, but NOW IT CAN DO IT FOR REAL?! The peripheral, which attaches to the Wiimote, has no release date (or purpose, for that matter) just yet.

But let's get down to the news that gamers (at least those who enjoy staying awake) are interested in hearing about, namely the brand new Metroid game. The Wii title will be called Metroid: Other M, and will be developed by – of all people – Tecmo's Team Ninja, creators of Ninja Gaiden. Known for their arcade-y gameplay and hyper-violent animations, the development studio will likely bring a darker touch to the Metroid franchise. The debut trailer shows a 3D, third-person sidescroller that seems to merge the first-person puzzle-solving of Prime with the third-person action of the original franchise. Team Ninja seems to have also taken this chance to develop a much more character-driven story, since Samus is no longer a mute character controlled in first-person. The game is due out sometime in 2010.

As if to tell Nintendo fanboys that they haven't been abandoned, Iwata also announced not one, but TWO new Mario games on the Wii. The first is New Super Mario Bros. Wii, which could have also been called New New Super Mario Bros., though that doesn't have the same ring to it. The game will feature essentially the same gameplay as its DS predecessor, but will also allow for coop play with up to four players when it drops this holiday season. (Check out the debut trailer)

The next game on Nintendo's plate was an even bigger announcement: Super Mario Galaxy 2, the sequel to 2007's bestselling, critically-acclaimed Wii game. The trailer shows more awesome gravity-bending, planet-hopping action, but this time, Mario's bringing along a friend: Yoshi, who seems to work very much like the Sunshine version of his character. I'm personally a little disappointed that we're not seeing a new reinvention of Mario, but that's hard to ask for in such a short time. Galaxy was a fantastic game, so more of it is certainly welcome, even if it's really not anything new. No release date was mentioned.

Finally, Iwata dropped a few non-megaton announcements: Wii Fit Plus, featuring six new strength and yoga activities and 15 new mini-games, is due out in the fall for a whopping $50...yawn. In addition, portable gamers will finally play their beloved Gameboy Advance franchise again with Golden Sun DS. I'm not too familiar with the Golden Sun series, but the trailer shows what looks like a sharp, competent Phantom Hourglass-style revisiting of the RPG franchise.