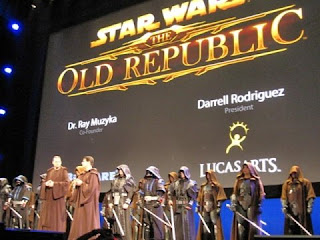 EA is more than just a game publisher. Their recent forays into revolutionary kinds of game experiences have elevated them to near-equals with the console manufacturers in terms of significance in the industry. Their E3 press conference was no exception.

The most important part of the conference was definitely BioWare's segment, where they showed off Mass Effect 2 (trailer) and Star Wars: The Old Republic (trailer), the MMORPG based on the popular Knights of the Old Republic single-player RPG series. The third game, which was displayed, like the others, in trailer form only, was Dragon Age: Origins, the spiritual successor to Baldur's Gate.

Peter Moore and Pete Sampras came on stage to represent EA Sports, and announced a very interesting new mode in Madden 2010 called "Online Franchise." It will allow players to customize their own teams and take them online, then maintain control over their teams from anywhere via Internet accessible devices like the iPhone. Moore also announced an EA mixed martial arts game (probably in response to the recent critical acclaim achieved by UFC Undisputed), titled, with all of the branding genius of a five-year-old, EA Sports MMA.

On the first-person shooter side of things, low-end PC owners will no longer have to worry about their computers being "too wimpy" to run the hyper-realistic Crysis. That's because Crytek announced in a teaser trailer that they would be releasing Crysis 2 (running on the new CryEngine 3) on both PC and consoles (360 and PS3). It is not clear if this will result in a downgrade in visual quality, though I would think that Crytek might have to downscale some pieces of the game for it to run lag-free on a console. (Then again, I'm not a PC gamer, so I'm not familiar with the tech specs required.)

Other than that, EA also showed some trailers for some of their previously announced games: Dante's Inferno (and its second trailer), Sabateur, Brutal Legend, and Need For Speed: Shift.

It seems like EA has cobbled together a nice bunch of IPs both new and old after their low holiday sales numbers frightened many into thinking that they would abandon unique and/or experimental games like Mirror's Edge and Dead Space. The lineup is still strong, so hopefully they will be able to ultimately see success with their unique titles.