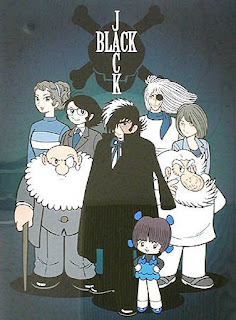 In this episode, Mitchy reappears to talk about Osamu Tezuka's Black Jack manga, which we've wanted to review since last fall when it began its English language publication courtesy of Vertical, Inc. Our second guest, Elliot from Luke and Elliot's Bearfighting Extravaganza, was invited onto the podcast between the first segment and the review, so he joins us for the remainder of the episode.

This episode was recorded the weekend after the last episode was released, which seems like a fairly reasonable schedule for the podcast going into the future. Maybe we'll end up doing that.

Or maybe I'll just end up not having enough time and the episodes will come out weeks late like usual. Which would be terrible. So, look forward to an attempt at a regular, every-other-week schedule from now on, but don't be surprised if we have to skip a week sometimes.

[0:00:25] Evan begins the show by shamelessly pimping his appearances on the Anime3000 Panel. He was on both parts of the Gaming episode: part 1 and part 2.

[0:15:35] Discussion: Elliot of Luke and Elliot's Bearfighting Extravaganza podcast makes a surprise appearance, and joins Evan and Mitchy for their Black Jack volume 1 review. But since he has read into the later volumes, Elliot provides some much-needed temperance to some of the generalizations (and Pinoko-hating) that come up. Highlights of this segment include: Having sex with 12-year-old elves, operating on a self-aware computer, and a child constructed out of jumbled human organs. One of those things doesn't happen in Black Jack. We'll let you be the judge of which one.

[0:43:23] Links of the Day: Elliot stays on for this segment, where Evan begins with the pilot for the failed anime TV block SushiTV (provided to the Internet by Justin Sevakis). Then Mitchy suggests a Wired article about Catan. And finally, Elliot has the announcement of, and video footage from, the new Team ICO project, dubbed "Trico." An argument between Mitchy and Evan about Shadow of the Colossus ensues. They once recorded a similar argument about the game that never made it to the podcast due to technical problems.

[0:48:54] Mitchy was writing one-paragraph reviews last month over at DownWriteFierce, and Luke and Elliot have been talking about silly things like Angels and Demons and Star Trek over at their podcast. Here at Ani-Gamers, Ink is continuing his column, Fullmetal Alchemist: The Brotherhood Diaries.