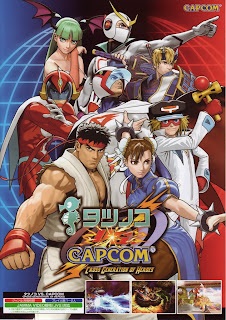 American fans might be very familiar with Marvel vs. Capcom, the popular fighting game series that pitted some of America's most iconic superheroes (Spiderman, Wolverine) against their capcom rivals (Chun-Li, Megaman). Now imagine the very same excitement of seeing Spiderman take down Ryu, but for a Japanese person. That is what Capcom has hoped to achieve with their new arcade game, Tatsunoko vs. Capcom: Cross Generation of Heroes.

Japanese anime studio Tatsunoko might not be a household name here in America, but its properties have seen marked popularity on both sides of the Pacific, from Gatchaman (a.k.a. Battle of the Planets) to Speed Racer to Casshern. Most American Tatsunoko fans were under the impression that the game would never come to North America because the lack of fan recognition for Tatsunoko over here, but lo and behold, the Capcom-Unity Blog has confirmed the North American release of the Wii version.

The characters on the Capcom side include the usual characters from Street Fighter, Megaman, etc., while the Tatsunoko side includes Ken the Eagle and Jun the Swan from Science Ninja Team Gatchaman, Yatterman-1 and Doronjo from Yatterman, Casshern, Tekkaman, and Karas, among others. And who could forget the giant lighter-turned robot, Gold Lightan (who has the silliest robot design ever)?

With so many awesome Tatsunoko characters, this is looking like a really fun time for any fans of classic Japanese animation. As such, I'll definitely be looking to pick this up when it hits stores on its as-of-yet-undisclosed release date.