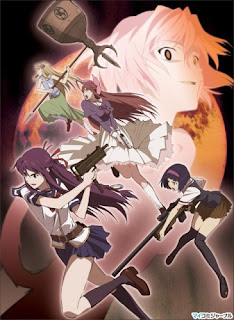 A few months ago, I reviewed the first season of this supernatural/horror/drama/fan-service extravaganza by GAINAX with great delight. The cliff-hanger ending of episode twelve gave me plenty of motivation and desire for more.

To recap, there are monsters, and there are strike teams of monks and undead teenage girls who fight off said monsters. Ouri, an introverted youth fascinated with death, has been following his adoptive older brother, Keisei and his partner, Makina Hoshimura. In a critical moment of defiance and selfless sacrifice, Keisei finally lays down his life for Ouri and Makina, setting the stage for the second half of this passionate drama.

In season two, we turn our attention to the Seven Stars, a team of untouchably powerful shikabane who seek the utter destruction of the Kougon Sect and their shikabane hime. With a clear central villain and a clear conflict of interests between central characters, you would think the story has plenty of steam to keep this freight train on the move.

Then the middle of the series comes, and with it the mid-season-two-drag. We fall into the shallow grave of flashbacks, recaps and tertiary character development, but only to emerge stronger than ever.

Somehow during the transition of acquiring Ouri as her new contractor monk, Makina has developed a curse, a super-power that gives her unlimited regeneration at the cost of shortening Ouri’s life. This twist is more for dramatic effect then an actual plot point, as she continues her regular Shikabane Hime duties of monster-mashing and self-loathing. Although it does lend itself to some pretty impressive fight sequences.

Some support characters are developed for the sake of cautionary tales between Ouri and Makina, while some new characters are introduced for the sake of fan-service. Not to say that Shikabane Hime loses any of its dark, morbid charm. Most of the fights leading up to the final conflict with the Seven Stars are downright cruel to viewers. Bravo. All that was lacking was development on the Seven Stars: a majority of them are not given memorable names or even discernible powers. Come on guys, you had 25 episodes! At least give me a back story!

Eventually, the Seven Stars and Akasha, the “traitor monk,” get their acts together and start causing mayhem on a grand scale. By using their young leader, a seemingly brain-dead girl named Hokuto, the Stars wreak Left 4 Dead-style havoc on Tokyo. The potential for mass-slaughter is ignored for a handful of “I’m-gonna-follow-my-path-no-matter-what” speeches, but I can overlook them.

The series caps out at twenty-five episodes, and while the plot does not resolve entirely, the characters’ resolve is set in stone, and we leave the series with a satisfying acceptance of life over a peculiar fascination with death, and the changing of the guard - the passing of the torch - is complete.

A huge part of Shikabane Hime’s appeal was its convenience. Using Hulu, I was able to watch the entire series at my leisure with about a minute of commercial interruption. Other than the obvious mid-season-two-slump, Shikabane Hime delivers and pushes its characters to develop their motivations, not just their powers. (Something Bleach might want to take note of.)