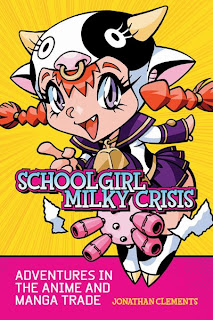 Don't judge a book by its cover. Or by its title for that matter. Almost everyone who saw me reading Schoolgirl Milky Crisis gave me a weird look or asked me a hesitant question. Who wouldn't? With a name and a cover like this, the book positively demands an explanation.

But perhaps that is what Jonathan Clements (translator, voice actor, columnist, and co-author of the Anime Encyclopedia) is actually getting at in his book, a series of collected essays (published and unpublished) detailing the behind-the-scenes world of anime, manga, and Asian pop culture. It's a world that doesn't quite operate like any other entertainment industry, with its multiple levels of licenses and its cross-cultural sensibility. Schoolgirl Milky Crisis is striking at first glance, in part because it mirrors the striking, question-filled world from which it draws. Appropriate, since the book's contents provide some fascinating answers.

Answers about the grueling work of a weekly manga artist. Answers about the origins of Chinese animation, and its connections with Japanese anime. And even answers about the importance of erotica in the anime world. Conversely, Clements often provides questions of his own, asking the reader to contemplate the idea of an anime industry where "No Format" is the new media format, where digital distribution takes over our viewing habits. He asks us if placing animation in its own category in the Oscars is an honor, or equivalent to a creative ghetto.

Throughout it all, Clements' writing remains crisp, snappy, and funny, and his essays are made especially entertaining because most of them are short magazine articles, each of which can be read in a mere five minutes tops. His observations about the companies he worked for, the shows he worked on, and the people he met are often surprisingly insightful, with a tone that alternates between bemused cynicism and honest passion.

Unfortunately, much of the book is comprised of articles that Clements has already published in magazines such as Newtype USA or NEO. As such, many former Newtype or NEO readers will find that they have already read a good portion of the book. Luckily, there are a fair number of articles included that have never been published, such as unpublished sleeve notes from DVDs, and two lectures given by Clements at British Universities. These lectures are undoubtedly among the highlights of the book. One describes erotica, and it's place in anime, with an eye to the historical developments of hentai/ecchi and the reasons for said developments. (He also has the best description of moe ever.) The second essay describes the behind-the-scenes work of anime translators and subtitlers, and is a must-read for anybody who has ever tried to debate subs-versus-dubs or fansubs-versus-official subs.

But of course, there's still the question of why the hell Clements would name a book "Schoolgirl Milky Crisis."

The reason is, of course, that he uses that name as a catchall for anime series that he does not want to name, for fear of incriminating staff or companies involved in some of his anecdotes. This practice is used throughout his essays, and while I understand the necessity of it, this constant use of replacement names can occasionally make his stories very confusing.

Schoolgirl Milky Crisis is more than worth its $15 price, especially for anybody who hasn't read very much of Newtype USA or NEO. (Otherwise, it might feel a little redundant) Either way, I encourage any fan with even an inkling of interest in the industry to go ahead and give it a try. The confused stares and awkward questions are well worth it for a book so packed with insightful answers.

[Disclaimer: This review was written based on a free review copy, kindly provided by Titan Books. We would like to remind our readers that Ani-Gamers reviewers do their very best to provide unbiased reviews of all titles.]