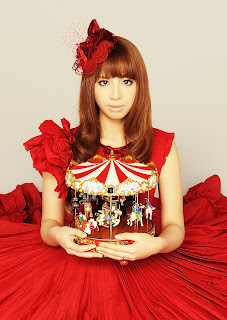 Otakon, the massive, 16-year-old anime convention, and the most popular one on the East Coast, has announced their first musical guest, and its not the expected J-Pop or J-Rock band. This year's Otakon will see the United States debut of cellist and pop vocalist Kanon Wakashima.

The rising pop star began performing at age 15, and was signed by Sony's DefSTAR Records label soon after. Visual-Kei star Mana became her producer, and worked with her on her first single, the May 2008 "still doll." Wakashima's first album, Shinshoku Dolce, just released in February 2009, though some anime fans might be familiar with "still doll," which was used as the ending song for the Vampire Knight anime.

It's interesting to see Otakon bringing in a brand new performer like Wakashima, who doesn't yet have a large following in the United States. Mind you, this could simply be due to financial constraints, but I'd like to think that it could represent a positive trend in anime fandom going into the future. Perhaps anime really is a gateway to popularity for Japanese musicians. Perhaps, with the help of anime conventions here in the States, they can "Hit in America."