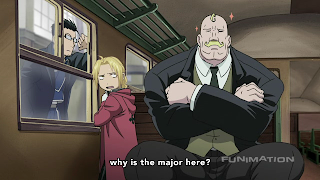 Watch Episode 6 - A Home with a Family Waiting

This episode starts off very similar to its FMA1 counterpart, with Ed and Armstrong headed to Resembool (and Al in tow, minding the sheep in cargo). And after that's when the chaos of contrast rears its head. Oh sure, it starts off easy by spending a little more quiet time in the train with Ed and the Major, but next thing ya know, Armstrong is spotting Doctor Marcoh while stopped at a random station and Ed is making an active decision to leave the train. Another divergence is Al’s accompaniment; Ed and the Major remembered to bring him along (gotta love brother-in-a-box...kind of wish I had one). FMA1 used the prematurely unloaded Al gimmick to explore feelings Ed had about his automail appendages (and the constant reminder they wrought).

But then a bit of familiar, for lack of a better word, calm: Marcoh’s reaction to Ed (plus Armstrong) is remarkably similar, but don’t be taken in! There’s change afoot! Marcoh volunteers the experimental Philosopher’s Stone to Ed and the Major as an example of his work instead of Ed going all Sherlock-Holmes and discovering his stash by himself. The later chaos between FMA1 and FMA2 is great. Since FMA2 has already killed off Basque Grand, how are Ed and Al supposed to save Marcoh from Scar, especially since they just boarded the train toward Resembool again? Oh wait, that chase around Eastern HQ already happened last episode. So how is FMA2 going to take care of Marcoh, who was transported to a safe-house by the Fuhrer only to be discovered by Lust and Gluttony? I guess Marcoh just has to entertain Lust at his own abode!

Speaking of Lust, who is every fanboy's (and lesbian fangirl's) favourite mechanic-gone-wild? Helloooooo Winry! There's less of a wry insult interchange between Ed and Grandma, but more of a tease between Ed and Winry ... and I find myself torn between my love of short jokes and my love for the Ed/Winry relationship aspect. Judge for yourself. Moving on, Winry gets a preemptive reiteration of FMA1 Grandma's line of concern for the boys' lifestyles before FMA2's Grandma gets to deliver it, in almost the exact same scene as FMA1. An annoying little difference is that Grandma Rockbell spells out the Elric’s reason for burning their house down, a less annoying one is that her dog (Alexander) wakes Ed out of a spell at the site of that burnt down house as opposed to his mother’s grave.

There’s something emotionally devoid of FMA2’s automail attachment scene, it seems easy on Ed, and his feelings about the pain he feels being nothing next to the price Al has had to pay is disappointing, but there is a warm moment between Grandma, Winry, and Al in which he thanks them for being the earnest surrogate family they always are to both of them. With that, and Winry bidding farewell in a nightshirt, we head of to Eastern Library.

Of special note, there’s teaser before the next-episode preview, where we are treated to a post-script revelation of Winry's, showing that she’s forgotten one of Ed's crucial parts (of his automail...get you mind out of the gutter!). In FMA1, this came only after a fight, lessening its implications. Revealing it early adds extra drama. I approve!