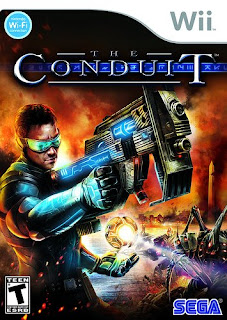 It was a feeding frenzy. Lots of sweaty men crowded around a small TV screen, watching the blood splatter as a stylized video game character was thrown into a saw twice his height. The crowd cheered as bullets broke through the carapace of a giant alien bug. A startled gasp was heard as a zombie leapt out toward the camera. And in the hands of these gamers was not a black gamepad, but a remote control: sleek, white, and all-too-familiar.

There were no grandmas playing these particular Nintendo Wii consoles, which were on display at the 2009 New York Comic Con. In fact, your grandma would probably disown you if she ever caught you playing the brutal cartoon action game MadWorld. I'd venture a bet that she wouldn't be too keen on the zombie game House of the Dead: Overkill either, and the science fiction shooter The Conduit is quite a far cry from Wii Bowling.

Welcome to the new SEGA on Wii.

Japanese publisher SEGA's move toward "mature" Wii games has struck a major chord with Nintendo fans and gaming journalists alike. On its release, the Wii split Nintendo fandom in two, as many disillusioned gamers felt that the game maker had abandoned them, choosing to focus its efforts on titles appealing to a "casual" demographic. Nintendo has tried in the past few years to hold onto its image as a publisher that appeals to all types: casual and "core" gamers, Nintendo's euphemism for the more commonly used "hardcore."

Early in the console's life cycle, Ubisoft released Red Steel, a violent first-person action game on the Wii that was already riding a hype wave that it couldn't handle when it crashed into gamers' homes in late 2006. The game was pulled down to a Teen rating due to the removal of blood (and the necessity for "Red" in the name), and the gameplay attracted widespread ire from video game critics. Ubisoft's highly-publicized flop seemed to spell certain death for mature games on the Wii. It is natural, then, that the gaming community jumped straight out of its seat when High Voltage Software announced almost a year ago today that they were developing a science fiction first-person shooter along the lines of Perfect Dark or Halo. The game, called The Conduit, had no publisher when it was announced. This bizarre decision was made in order to give the developers (who self-funded the venture) complete creative control, so that they could make a Wii game "that we ourselves wanted to play," according to High Voltage's Chief Creative Officer Eric Nofsinger, who I spoke with at the New York Comic Con this February.

Mr. Nofsinger animatedly explained his team's creation, to the extent that sometimes it was possible to forget that I was talking to a developer and not a fellow gamer. When asked about the stigma against mature games on the Wii, he spoke with an optimism that I have heard only sparingly since the launch of the console. "The Wii deserves it," he said quite bluntly. "[The Wii] is a powerful enough system in order to make compelling content, but more importantly, it's a really unique input peripheral, and provides you a type of gameplay that you can't do on the 360 or PS3."

Months ago, fans began to fret over The Conduit, worrying about when it would get a publisher, and who that publisher would be. Mr. Nofsinger described the unusual process of development-sans-publisher as "scary as hell. We believed really strongly in what we were trying to do," said the designer. "We put our money where our mouth was." In November of 2009, High Voltage reached a publishing agreement with SEGA, and The Conduit finally had a home amid the publisher's growing libary of "hardcore" Wii games. 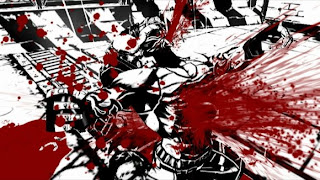 These included MadWorld and House of the Dead: Overkill, which were both on display beside The Conduit at the New York Comic Con 2009. Overkill built on the existing House of the Dead arcade franchises in an attempt to bring light gun zombie action to the Wii. MadWorld, on the other hand, was to be an outrageous, cel-shaded action game about a man trapped in a twisted game show and forced to kill his opponents in order to survive, in a game that is equal parts The Running Man and Sin City.

Nofsinger seemed very happy with High Voltage's publishing partner, telling me that even after the publishing agreement had been made, SEGA "let us continue to do our thing." And naturally, he thought that SEGA had just the right environment for an aspiring hardcore game on the Wii. "I don't see a lot of third parties really pushing the system outside of SEGA," said Mr. Nofsinger. "SEGA's doing some really cool stuff, and I'm really proud to be a part of that." 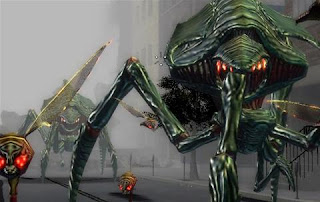 But can a game like The Conduit succeed on a system in which most hardcores seem to have lost all hope? When even the gaming press has largely given up on the console (well, not everybody), it's hard to argue that "core" gamers are still flocking to the Wii (or even turning them on).

Mr. Nofsinger hopes that The Conduit will solve this problem by relying on the philosophy of a game made by gamers, with input from gamers. "We realized that even within our own office, there were a lot of opinions about what a good Wii first person shooter could be. So we reached out to a lot of the fan community, the Nintendo fans, and the media, and we got a lot of opinions," said Nofsinger. "What we landed on was [that] there was no one right answer, so we opted for a great deal of customization." That all-inclusive development style is a break from the practices of most third-party Wii developers, and it shows High Voltage's acute understanding of how important its game will be. The Conduit, MadWorld, and House of the Dead are all referendums on the demand for mature gaming on the Wii. Their rise or fall will ultimately determine if there is truly a viable market for games on the Wii that break outside of the casual. 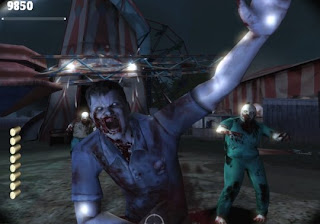 House of the Dead and MadWorld have received some great press desite a lack of promising financial performance. SEGA said that the former has "absolutely met our expectations" and described the sales of the latter as "very encouraging," but the numbers tell a different story. Both games have performed significantly under par, with each taking only a middling or low position on the top 50 charts for its respective release month, then promptly dropping off the chart. It is not clear if SEGA's strategy will ultimately find success in the fickle world of game sales. Will The Conduit be the saving grace in SEGA's desperate pursuit of the "Exiled Hardcore"?

No one knows just yet. But one thing at least is clear: These aren't your grandma's Wii games anymore.

The Conduit hits stores in North America on June 23, 2009. MadWorld and House of the Dead: Overkill are currently available wherever video games are sold.