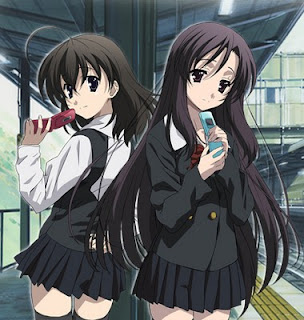 “At first, I was satisfied with looking...sitting next to her...just having lunch with her made me nervous. I wonder when it started...when I wanted to touch her, when I wanted to hold her...I ended up not being able to control myself with just that. I wanted more...more...and it turned into my selfishness.” – Makoto Itou, episode 12.

Half of me wants to recommend School Days because of the frightening bait-and-switch and treatment of high school sexual promiscuity. The other half wants to know how a series this twisted was ever pitched to a producer. Perchance it went something like this:
“Thank you for meeting with me, Mister Producer.”
“So let’s hear your idea, TNK Studios.”
“Well, we wanna do a high school romance. We wanna start casual and light-hearted... then rape half the cast.”
“...go on...”

Makoto Itou has a secret crush on the beautiful, shy girl that rides the train with him every morning to school. She is Katsura Kotonoha: quiet, clean, and beautiful. One of Makoto’s classmates, the free-spirited Sekai, collaborates with him to help him get his mojo working. School Days begins with the light-heartedness of A Midsummer Night’s Dream, develops slower than Julius Caesar, and switches gears to spiral into an ending that would make Othello squirm.

Beautiful animation is paired with unusually overt dialog. The director is very careful to emphasize the character’s cell phone texting as their sole means of honest self-expression, since everyone is lying to someone else in this series just to keep Makoto and Sekai happy together. There is almost no music, but the sound of trains and ringing cell phones sets the lackluster pace of the series.

In order to make Makoto more comfortable around Katsura, Sekai puts him through special training...and that’s when things turn ecchi. Sekai literally throws herself at Makoto, saying that it’s "just practice" and not to be taken seriously. But of course she secretly loves him and longs to make Makoto hers. Now comes Makoto's inner struggle: does he go for the girl who gets dirty with him, or for the girl he wants to get dirty with?

This is where things get complicated, and for the first half of the series, there is memorable (though sluggish) sexual tension and believability in Makoto’s infidelity toward both Sekai and Katsura. Whom does he like? Answer: both. Unfortunately, despite its poignancy on love and sex, School Days will never see the light of American television; for that you can thank the gratuitous sex, nudity, and rape. That’s right, the "r" word – we couldn't have a show about betrayal and relationships without the "r" word.

By the story’s end, Makoto has the best year ever, having more affairs than Zeus, and less regret than a guest on Jerry Springer. I do not particularly recommend this series to experienced fans (let alone newbies); it’s just a bit too torpid. School Days is a carefully composed cautionary tale about the fruits of lust, and provides a clear, if a bit exaggerated, statement on the confusing physical dependence of adolescent sexual awakening.