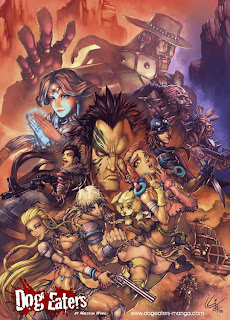 What would happen if the entire world economy collapsed, and a mysterious event called the "Die-Off" killed most of the world's population? According to Malcolm Wong and Guillermo A. Angel's new manga-style comic miniseries Dog Eaters, America would be overrun by small armies – sort of hybrids of biker gangs and Native American tribes – and our country would become a lawless desert full of savages and sin. And you thought Watchmen was depressing!

The main characters are members of a group known as the "Black Dog Clan" (also derisively dubbed as the titular "Dog Eaters" due to their propensity for consuming canines), a clan under the leadership of the proud Chief Lamont. His reckless son Tommy is your typical hotheaded-20-something-year-old, while his younger daughter Tracy (with a big-eyed character design ripped straight out of manga-style) is a sentimental little girl with a puppy. And that puppy's name is Mr. Fluffy. I'm not kidding you. Finally, there's an injured newcomer who the clan members pick up while on the road – a mysterious young man named Bevan who hails from the North.

The premise of Dog Eaters definitely sounds exciting, and at times it is. But most of the time, the comic comes off as being unabashedly ridiculous. It sports a hyper-masculine cast that drives around in giant trucks, stops at giant casino towns, and has sex with women with giant breasts. Catching the "giant" motif here?

Some of the issues that the story (adapted from Wong's award-winning screenplay) deals with in the side-plots are interesting, such as the conflict between Lamont and his wife as he has an affair with a young clanswoman. On that front, there's also a super-buff black woman named Chunga in the Clan to round out the limited female cast, but there's still that taint of testosterone on every single thing in this series. It's really not a major problem with the work itself, since the target audience is clearly entirely male, but it certainly doesn't add any depth.

There are times where the story starts to express some real tension, such as when Tommy is being chased down by the town's local corrupt sheriff. But the primary problem with these sorts of scenes is that in the first two issues, there is still no clear conflict. According to the covers of the first and second issues, the sheriff will most likely be the primary villain, but I still can't see any sort of central story forming. I'm sure it's about to coalesce, but I feel like three or four issues in is a little late to be introducing your primary conflict (especially in a series released in comic book, not graphic novel, form).

Angel's art does the job, managing to skirt the line between manga-inspired and manga-imitation in a way that the best OEL manga-ka can't always do. Plus, the comic is in full-color, which helps to make up for some of its artistic flaws. These include some stiff action scenes that don't manage to get across the same immediacy as the manga that Dog Eaters is trying to emulate. The blame rests on Angel's choice to put such a focus on the detailed American style of comic books, which is hard to reconcile with the selectively simplified Japanese action manga style.

Though it might not be the prettiest dog in the kennel, Wong's apocalyptic story is an entertaining (if forgettable) comic that skirts the line between pure action and character-based drama. There's some potential here that makes it worth checking out for action-hungry readers, but Dog Eaters doesn't have enough of a unique bite to hold readers past the first few chapters. Check it out if you're bored and looking for a fun read. Just don't expect a purebreed.

Disclaimer: This review was written based on a complimentary review copy provided by Dabel Brothers Publishing.