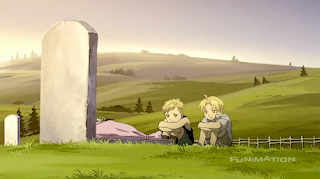 This episode starts with the explanation of alchemic principals from FMA1 (adding in an explanation about the taboo). Using nonconsecutive time loops so effective in FMA1, FMA2 starts this episode with the Elrics on a train to Liore. As mentioned in the last summary, Liore is a destination in this series as opposed to a city the Elrics happen upon while being lost in the desert. Depending on how you want to take this inter-series juxtaposition, the situation puts Ed and Al under Mustang’s command or proactively hunting down the philosopher’s stone on their own. But, given Ed’s “you never give us any time” response to Mustang’s query in the first episode as to if the brothers had found any way to get their bodies back to normal, the latter just might be the case. The train ride serves as a frame for the flashback which is the meat of this episode: the original taboo.

In a flashack, a fun short-joke volley that occurs between Ed and Winry’s grandmother is a great way of introducing the dish-it-out-as-well-as-she-can-take-it character, as is the dinner scene with the introduction to Ed’s aversion to milk (as well as a familiar-sounding praise of stew). This all takes place after a scene with Ed and Al sitting by their mother’s grave, which provides some excellent foreshadowing given the focus of this episode.

A bit disappointing was the revelation of Ed and Al’s teacher in a flashback, eliminating the possibility of FMA1’s Season 1 finale surprise but simultaneously providing a solid, linear chronology for viewers to follows in terms of the boys’ alchemic development. Along a similar vein, emphasis is placed on the disciplined and patient research Ed and Al did as kids to bring their mom back, which makes the attempt in FMA1 seem like a haphazardly conducted and entirely emotional ordeal. Not altogether wrong, mind you, but a vastly different feeling.

With regards to the taboo, everything seems more digital...less human and more...blocky. I’m not a proponent of gore, but the lack of what it was in FMA1 seems tragic here. Everything seems a little too...clean. On the bright side, the array and the sequence thereafter is darned nifty. There is also much more time spent by/in the gate, wherein an interesting encounter with some nigh-shapeless forms there also occurs (which also didn’t happen until FMA1’s Season 2). Upon Ed’s mental return, the little bit of extended time with the transmuted mother is excellently grotesque and pitiful; her staggered motion and actions are perfect to evoke the right tone.

Another difference is that, on the night of the ill-fated transmutation, Roy Mustang arrives to the Elric’s home with Hawkeye (as opposed to alone). This brings about another very interesting instance: the direct transportation of a dialog between Winry and Hawkeye in Season 2 of FMA1 to the second episode of FMA2, wherein Winry talks to Hawkeye about her shooting people. While the insertion here does not bring about any of the weight FMA1 had because the thread has yet to be gently woven about how Winry’s parents died at the hand of the military (not to mention who in the military it was), there are some nice things that FMA2 does with this scene. Firstly, a young Winry is trying to figure out life from a younger Hawkeye; secondly, a younger Hawkeye, a little less resolute, is trying to justify her actions to a young girl she’s trying to bond with; and lastly, the show-don’t-tell of the “Because there is someone I have to protect” answer Hawkeye gives Winry as to why she became a soldier (which is still more obvious than FMA1, but nice all the same).

What would pass unbeknownst to FMA2 viewers unless they’d seen FMA1 is the importance of Winry’s goodbye to Ed and Al as they leave Resembool. This short scene offers a complete circle to FMA1 using elapsed time. FMA2 Winry’s “I’ve made up my mind to support you until you get your body back,” nearly repeats the declaration made in the last episode of FMA1, in which Winry was speaking to Al in a vow of commitment because Ed was not there to declare it to. If you think about it, this is a brilliant scriptwriting choice (if it was planned to play upon the heart strings of FMA1 watchers).

My last note of importance is that of the different alchemy exam. Ed is cocky, not nervous – not cramming or worrying – just ready to perform. This, added to the completely different circumstance and setting of the exam, makes the whole scene seem a bit more aggressive and punk-ish...not exactly fitting with FMA1’s Ed, but seemingly right in line for the FMA2’s Ed, who, as it seems, would rather risk not getting his state alchemy license (and brother's body back) just for a chance to shove a spear down the evil eye of authority. Not smart, but then again, he's, what, 12? So it's believable,even if out of character. After all, FMA2 has not yet overly stressed the level of commitment Ed and Al share when trying to restore themselves and can only suffer the resulting lack of urgency therefrom.