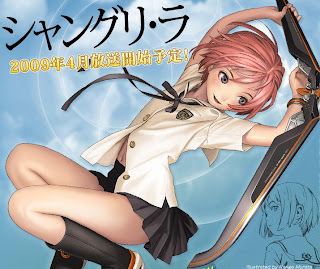 The formidable Uncle Yo makes his triumphant return to the podcast to help with our Spring 2009 Anime Season preview (and to insult Russians, theatre-goers, pink-haired people, and pretty much everybody else). We've got four different anime up for discussion, as well as our usual "What'cha Been Doing?" and "Link of the Day" segments.

Oh yeah, Evan mentions in this episode that we have a contest going on. If you were unclear on how the rules work, go ahead and read up on them in the show notes, or send us an email to clarify.

And as a final note: Our next episode will most likely feature the awesome voice actor/podcaster Kyle Hebert as a guest-host. That is, as long as Evan can find a chance to play Street Fighter IV, the topic of our upcoming discussion. Look forward to it.

[0:00:00] Intro: Stephen Totilo, MTV Multiplayer blogger, who resigns from that post as of...today! This makes us sad.

[0:00:18] Hey hey, welcome to the show. We do some con talk at the beginning. Karl's been performing at Animeland Wasabi (Denver) and Tekkoshocon (Pittsburgh), while Evan just ran a panel at Castle Point Anime Convention in Hoboken. Watch the second half of the panel here! Evan also pimps two podcasts. One is Luke and Elliot's Bearfighting Extravaganza (link below), since we got a nice email from the titular Elliot, who listens to our show. The other one is the Anime 3000 Panel, where Evan guest-hosted on the season opener.

[0:06:16] What'cha Been Doing? Karl's watching Shikabane Hime: Aka and White Album, and playing Mirror's Edge. Evan's watching Cyber City Oedo 808, reading Schoolgirl Milky Crisis (which you can win a copy of in our contest!), and playing a bunch of stuff that he already talked about in previous episodes.

[0:12:23] Discussion: Spring 2009 Anime Season. We talk about four different 2009 spring season anime: Natsu no Arashi, Shikabane Hime: Kuro (yeah, it's not technically the spring season, but just roll with it), Ristorante Paradiso, and Shangri-La. Highlights of this segment include: strawberry bombs, zombie kisses, and a giant tank-cutting boomerang.

[0:48:20] Links of the Day: Karl proclaims his love for humor site Cracked.com, and links to a fake script by Michael Bay for Transformers 2. There may or may not be transforming boobs in the script. Evan can't get over how funny this Mega64 "Cosplayers" video is. "Wheeled Beast Cosplays!!"

[0:52:56] That's it! Show's over, buddy! Review us on iTunes. Enter our contest! (Oh right, should probably mention the rules right now) "Schoolgirl Milky Crisis" is a made-up anime title that Jonathan Clements uses throughout his essays. Pretend that it's a real anime, and write up a brief plot summary (it can be one sentence if you want) describing what its about. Send it either in audio or text form (via email). And make it funny, because we're grading on how funny it is. Got it, punk?!