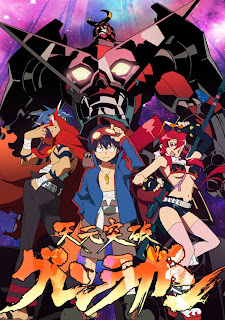 It's Gainax. Of course there are going to be giant robots and bouncing boobies.

From the very beginning, Gurren Lagann is a story of reaching new heights and climbing higher. Simon (pronounced See-moan) is a measly digger, one of the countless humans living in despair beneath the Earth's crust. Banished to never see the sky above, mankind is truly at its lowest. If it were not for his inspirational and testosterone-exuding gang-brother Kamina, Simon would be almost deprived of confidence and willpower. Change is set into motion as Simon discovers a mechanical face buried in the soil, and the tiny drill that activates it. From there, destiny spins itself out of control as Simon and Kamina aim their sights for the grand, unexplored world above their tunnel city.

Halfway through the first episode, a giant robot falls from the ceiling, as does a beautiful, rifle-wielding tom-boy named Yoko. Once Simon pilots the pint-sized Lagann to victory, Team Gurren's journey truly begins. Upon reaching the surface, Simon and Kamina learn that mankind was driven underground out of terror of the Beastmen and their giant robots. They join up with Yoko's village and begin living to the fullest, leading a full-out war against the Beastmen and their terrifying Spiral King.

I've waited a long time for an anime like this. I remember being a hot-blooded teenager, thrilling over Dragon Ball Z, Ronin Warriors and, yes, even Sailor Moon. When a character wanted something, they yelled louder, lights appeared from nowhere, and they achieved the impossible. It's that moment in anime when willpower and desire are personified, and every hair on your arm stands up on end. If it weren't for the visual barrage of colorful characters and hypnotic robot battles, Gurren Lagann's predictability and formula would murder its potential. But it's almost too good to dismiss as another kids show overloaded with toy company fodder.

From there, the formula is set in place. Just as good as it is bad, you cannot shake off Gurren Lagann's almost cop-out ability to drill through every obstacle imaginable the same way every time. Whenever there is a chance of emotional development and a deep meaning, a bigger robot appears and the human's flagship mecha, Gurren Lagann, makes an even bigger drill, penetrates the enemy robot, and pounds its way to a lightshow of victory. 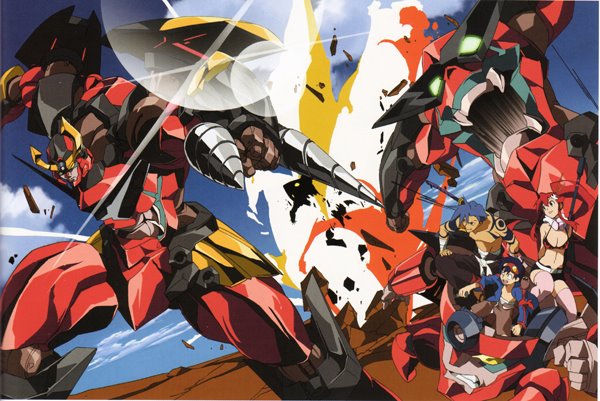 Gainax's distinctive choppy animation style that they embraced during FLCL adds a level of spunk and pep that compliments the chromatically intense visuals. Staying on the visuals, the eyecatches are some of the... catchiest I've seen since Cowboy Bebop, in that they stand out with a raw and colorful style on their own. The fights are way over-the-top and can easily lead to an epileptic breakdown without proper lighting or medication on hand. Lagann's animators use old-school cell-paint techniques, which are severely lacking these days in anime; I'm getting tired of bland and depthless 3D rendered backgrounds. And because this is a Gainax anime, no drill-to-penis innuendo is too low nor too overt; in fact very little is spared. Yoko provides the essential "Gainax-bounce" and her fiery brassiere top becomes a character on its own.

Take the fan gushing with a grain of salt: Kamina's unlimited "fighting spirit" becomes obnoxious quicker than expected. The over-the-top ego drills on your nerves, but it all leads up to the more fascinating and challenging second part of the series. Without any spoilers, I will say this about the second season: think Watchmen or Squadron Supreme, when the righteous make the wrong choices for the right reasons.

Bang Zoom delivers a fantastic dub. Steve Blum goes way off-character to play Leeron, the effeminate tech-head. A-lister Kyle Hebert does a great performance as Kamina, bringing full bravado and macho suave to the all-around badass Kamina. This cast was very carefully put together, and the precision of voice director Tony Oliver paid off fantastically. For more details, check out our podcast episode that Evan recorded at the New York Anime Festival – still jealous over that, Minto!

But suspension of disbelief set aside, Gurren Lagann is worth it – without a doubt. This wasn't the smartest anime, nor the deepest, but it never tried to be. It just tried to be a good ride with robots – and even a bitter, jaded fan like me couldn't help but fall head-over-heels for it.