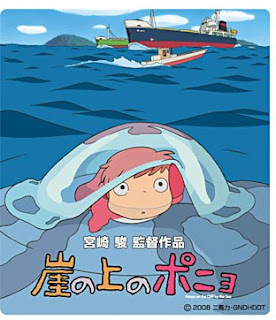 Wow, I blink and all the news flies past me. In the last couple weeks, we've seen some nice expansion of the anime industry with video distribution and theatrical plans announced for a whole slew of new shows. First off is today's announcement from Disney of a release date for Ponyo on a Cliff by the Sea, the newest anime movie from award-winning director Hayao Miyazaki and Studio Ghibli. Disney will release film in a currently unspecified number of theaters on August 14, 2009, the only week when it will face no major box office competition in the animation category. I haven't gotten a chance to see Ponyo yet (seeing as I don't live in Japan and didn't indulge in fansubs), but it looks like a movie that can really sell to the American family audience. Make sure you support Ponyo by going out to see it this summer!

In celebration of Hulu's first birthday, FUNimation has announced three new titles that will stream on the website, now the second-most-popular video streaming site (behind only YouTube). Those three titles are the baseball anime Big Windup (a.k.a. Ookiku Furikabutte), the sci-fi Heroic Age, and the full-length film Origin: Spirits of the Past. Clarissa of the Anime World Order podcast is a pretty big fan of Big Windup, and Uncle Yo recently gushed over Origin in an Ani-Gamers review, so I'm excited that FUNi has given us a chance to watch these titles for free. 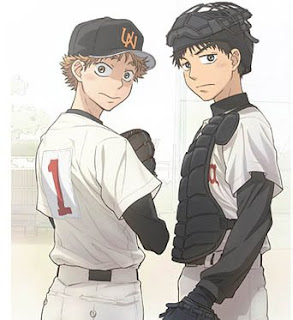 On the topic of GDH (Gonzo Digital Holdings, the studio behind Origin), FUNimation has finally solidified a new deal with the struggling studio, which cut its anime production in half just a few months ago in response to economic and industry pressures. The company has been attempting to reap a profit from streaming its shows for free on websites like CrunchyRoll, but most reports are saying that the endeavor has not brought in much money for Gonzo. Oddly enough, the move to CrunchyRoll was seen by many as a betrayal of FUNimation, which has so often handled the American distribution of Gonzo's properties, but was now out of the loop as the studio dealt directly with video distributors.

In response, the apparently forgiving (or just smart) folks at FUNimation have agreed to pair up with GDH and take over North American distribution for all of its properties. That includes video streaming sites, presumaly meaning that FUNi would regain its place as the middleman between GDH and CrunchyRoll, which Hulu would probably also see an increase in Gonzo titles hosted on its service. The first titles to be taken over by FUNimation are The Tower of Druaga and Blassreiter, the first series that GDH ever broadcast simultaneously.

I think that it is simply amazing that Gonzo took such a risk in moving to a simultaneous broadcast, streaming video model, and despite their losses, were able to hold out until this new development. Now FUNimation has followed in GDH's footsteps and even supported the studio, and the entire anime industry (FUNi pretty much controls the whole thing) is finally participating heavily in the video distribution market – the true future of the industry in this blogger's opinion.

Finally, AD Vision, once the most preeminent anime distributor in the country, now nearly license-less and struggling to maintain relevance, has put some of its Anime Network titles on the iTunes store. While I don't think that this will have a big effect on the company's fortunes, it should be able to provide some income from their anime properties, since the sales through the iTunes Store are almost pure profit. The titles now available for download are Angelic Layer, Mahoromatic, Pet Shop of Horrors, Saiyuki, and Tsukihime.

And with that, I think that I can confidently say that the anime industry is finally moving in the right direction, with video streaming, simultaneous broadcasts, and direct downloads all options for those who want to watch their anime for free or cheap online (and without fansubs). Now that's change we can believe in. (I couldn't help it!)