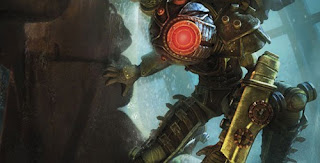 Details have finally surfaced (haw haw) for the long-anticipated sequel to 2K Boston's ambitious, award-winning 2007 first-person shooter Bioshock, thanks to a world exclusive in this month's issue of GameInformer Magazine.

According to the magazine, players will play as the "first" Big Daddy, who must fight other Big Daddies in order to acquire a Little Sister. There will also be a new type of enemy called a "Big Sister," which is (as the name suggests) a female version of the Big Daddy. It's faster, and according to the picture at right, it also looks considerably more deadly. In the process of your adventure, you will be able to use the Big Daddy's trademark drill weapon, as well as the plasmids that made up much of the first Bioshock's gameplay.

It's nice to see that 2K is trying something a little easier to digest than a linear sequel, since it probably would have really diluted the franchise. While no sequel at all would have best preserved the spirit of the game, I think that this is a pretty good way of making a second Bioshock game without devaluing the unique playing experience from the first. Who knows, maybe this new game (presumably a prequel) will provide a deeper investigation of Rapture's founder Andrew Ryan, undoubtedly the most fascinating character in the first game.