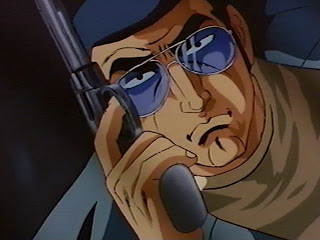 We went well over an hour in this, one of our longest recent episodes. Maybe that's because Mitchy's back, and he and Evan can't help but talk for an hour about awesome things like Golgo 13 and, um, Golgo 13. This episode's got "What'cha Been Doing?," a review of the 1983 anime film The Professional: Golgo 13, and some Links of the Day at the end. What more could you ask for? Maybe a special secret message at the end of the episode. Oh ho ho, but I've already said too much.

Oh, and it's a little late to tell everybody, but Evan is going to host/already hosted a panel about blogging and podcasting at Castle Point Anime Convention in Hoboken. If you're going/were there, make sure that you say/said hi. Goddamn, now I'm really confused.

[0:00:08] Mitchy and Evan discuss the relative value of our respective systems of measurements. Because we know that anime and game fans are soooo into this kind of stuff.

[0:01:11] We open, then Evan does the whole "other podcast" thing. He was a guest on the Gaming Dungeon Anime Podcast, and Anime World Order graciously played our promo. Then Mitchy talks up his new(ish) blog, DownWriteFierce.

[0:03:04] Rorschach's journal, October 12, 1983. Dog carcass in alley this morning. Tire tread on burst stomach. Mitchy and Evan talked about Watchmen. They thought it was a good adaptation. Boring for "normal" people. Soundtrack sucked. No mention of blue penis.

[0:27:16] Review: The Professional - Golgo 13. For most of this review, we just summarize the plot, and tell everybody how awesome Golgo is. At the end, we talk about how Akio Sugino (animation director) likes shiny things, but our serious discussion of this movie can only last for so long. Check out the psychedelic car chase (via YouTube) that Evan talks about. Highlights of this section include: Golgo 13 has sex with everyone, impromptu church demolition, and Silver's improbable grenade "incident."

[1:04:56] Links of the Day: Mitchy lets everybody know about the Battlefield Heroes beta, and Evan discusses the first anime convention ever - YamatoCon.

[1:10:01] SUPER SECRET PODCAST CONTEST!!1!one! Yeah, podcast listeners get a special contest just for them. (Don't worry, there will be one on the blog too.) If you want to find out how to enter, how about you listen to the episode? But don't skip to the end! That's cheating, and you know what we do to cheaters...