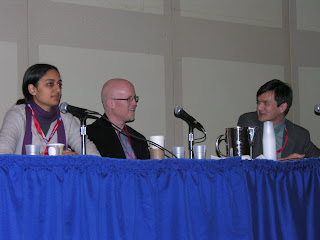 Del Rey
At the Del Rey Manga Happy FunTime Hullaballoo (yep, that's what they called it), some of the most prominent folks from Del Rey (including Ali T. Kokmen, Trisha Narwani, and the all-powerful Dallas Middaugh) sat down to list off their new releases, which I've organized in bullet-point form below:

Check out the news from Yen Press and CMX after the break! 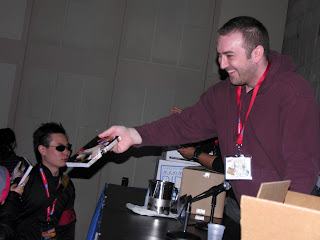 Yen Press
Yen Press President Kurt Hassler and the other folks from the manga publisher showed up at their panel room today to provide us with some sweet, sweet new licensing announcements and (as most of the packed room was hoping for) some sweet, sweet giveaways. The new licenses are listed below.

Naturally, the talk of the room was the licensing of Yotsuba&!, which was originally owned by ADV Manga until their company went under, effectively ceasing the publication of the manga. In an epic Powerpoint mistake, the folks from Yen accidentally revealed the license of Yotsuba&! a few slides early, resulting is such a deafening roar from the crowd that Kurt's microphone shorted out. (At least I like to think that that's the reason.)

When asked about the translator selected to work on the new release of the manga, Yen told us that they selected a translator who had done some work on the ADV release, so they had some familiarity with the title. Additionally, the manga will not be published in Yen+, but Yen Press is currently looking at republishing ADV's first five volumes of the title

Finally, Kurt pulled out boxes upon boxes of Higurashi and Soul Eater manga and merchandise, which he was giving away... for free. Described by many as a "feeding frenzy" or quite simply "Animal House," the panel room was filled to bursting with gleeful fangirls (and fanboys) entering, exiting, and re-entering the line to pick up more and more manga, while the manga press corps watched in awe. 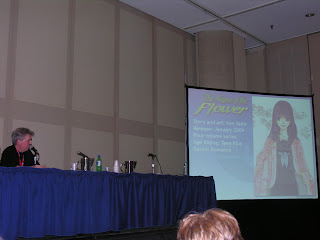 CMX Manga
DC Comics were firing on all cylinders at the new York Comic Con, with not only representation for their Western comics and DC Universe Online video game, but also a panel run by their manga division, CMX.

The panel was unfortunately nothing more than a simple list of the latest titles coming out from CMX, all of which I've listed below:

Regarding the CMX Mobile service's possible expansion to American cell phones, the division is "discussing a variety of options for a variety of devices." Of particular note is that they are looking at devices other than cell phones as well. (DS makes sense, since there are a lot of Japanese companies trying to pull that off.) And that's a wrap for the manga panels of NYCC09 day two!