Yeah, these panel reports are late, but I had a few things that I wanted to say in relation to them. First up are the actual announcements. After that I'll have my little analysis. 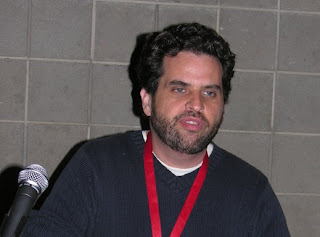 Bandai Entertainment
Bandai is one of the few anime companies holding on in the struggling anime industry, thanks in no small part to licenses for fan-favorite shows like Gurren Lagann, Code Geass, and Gundam 00. On that topic, the only big announcement made by Bandai at the New York Comic Con was their license of the Gundam 00 and Gundam 00F manga, as well as the light novels based on the series.

One of the more interesting things that Bandai rep Robert Napton let slip was that the first presses of the Akira Blu-ray release have already sold out to retailers, and the next presses will be in "a couple months." Also, Robert confirmed that Bandai will NOT be distributing Makoto Shinkai's award-winning 2007 film 5 Centimeters Per Second, previously licensed by ADV before they went under. Who's going to pick it up then? The only possibility seems to be FUNimation, but if they wait too long, the buzz might completely wear off. (it already has to some degree) I'd hate to see 5cm/s come out years late and experience terrible sales numbers. 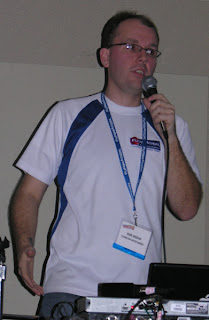 FUNimation
FUNimation also only felt the need to send one representative, the ever-charismatic Adam Sheehan. He began his presentation by showing some charts to illustrate FUNi's growth in a bad economy, hoping to reassure anime fans who fear that our little niche will be crushed under a failing global economy. (I don't blame them, we're all scared.)

Other than that, Sheehan just went over FUNi's new releases and answered some questions. Among his answers to those questions was word that the FUNimation podcast has been put on hiatus until "things get better," Baccano will probably be released in a 13-episode boxset, and FUNimation hasn't licensed Hellsing Ultimate yet because it quite simply "hasn't been offered to us."

What really struck me about both of these panels was a single quote, spoken word for word by both Adam and Robert: "Single-volume releases have gone the way of the dodo." Hearing this exact same sentiment said in the exact same way from the two biggest names in anime got me thinking about what that says about the anime industry. Dare I say it?: the New York Comic Con 2009 was the site of the official death of the single-volume release. And you know what?

The single-volume release has always been one of my biggest problems with anime releases. Yes, I understand that people want their anime quickly, but even if you released DVD Volume 1 of some show on the same day as it was released on Japanese television, what are the odds that the average otaku will buy that $20 DVD instead of watching an HD-quality fansub? Exactly.

The box set release is where the real purchases come in. If anime companies like FUNimation released shows in cheap boxsets and scrapped the single-volume releases entirely, they would save quite a lot of money on DVDs that are probably not selling very quickly during their first few runs. Luckily, this seems to be happening, so hopefully FUNi and Bandai should see the improvements immediately – Bandai especially, since the combination of Code Geass on TV and boxsets in stores is exactly the kind of model that has worked for American television for so long.

I will admit that I don't have the sales numbers for any of these companies, so I don't know how single-volume releases sold when they used to be all over the market. Still, I can say from personal experience that the average 15-year-old otaku will not buy six $20 DVDs, so the strategy is inherently flawed.

It is said that necessity is the mother of invention, and this recession just might be the very necessity to spur the kind of invention that our industry needs right now.