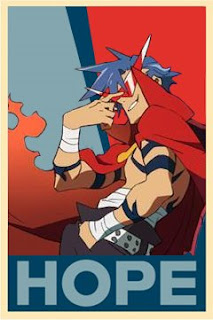 The bastion of American pop culture might think that "those japanimation things" are far below them, but fear not, fellow otaku! We shall smite the ranks of MTV for their folly of trying to turn some of us into "normal people" with their reality show Made.

In what form shall our retribution rain upon their cowering heads? Well of course, it shall be in the form of votes; votes for Kamina of Gurren Lagann as MTV's "Baddest Badass." I mean, John McClane is pretty badass and Batman is sort of cool, but let's face it – Kamina is the most hardcore guy ever. The dude literally defines manliness! And so, Ani-Gamers stands with AnimeVice and Japanator in showing MTV that anime is far more badass than mainstream American entertainment.

Head over to MTV's site immediately to tell them why Kamina deserves to be #1 on their final Top 10 list. Remember: Vote otaku. Vote awesome. Vote Kamina.

Correction: The "Worst Picture" nomination for Speed Racer was from the Golden Raspberry awards, not MTV. The incorrect line referencing the nomination has been removed from this post due to the error.