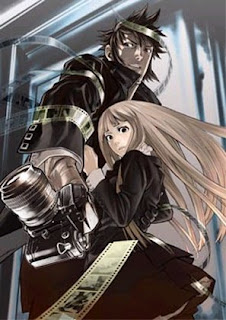 Noir is hard to pin down as a genre, because most critics only selectively agree, collectively, on exactly what it is that comprises the style. Also, certain films carry the weight of noir without exhibiting any of the specific elements previously conferred upon. This lends to a know-it-when-you-see-it mentality more often than not applied to general mood in movies that “dealt with the kinds of tragedies, scandals, and duplicities that bordered on their audience’s everyday experiences and that appeared regularly in tabloids” (Grant 224). And if you’re looking to define noir through any specific distinction in the 2005 anime Speed Grapher, it’s all between the lines...literally. Cool your heels on the sub vs. dub debate and indulge in both to discover that the translation of the dialogue/monologues is what defines Speed Grapher’s sense of noir.

That said, film noir was originally a term used by French critics to describe Hollywood movies of the post-war 1940’s era (up through the 1950’s) that portray “a darker perspective upon life than was standard in classical Hollywood films and [concentrate] upon human depravity, failure, and despair” (Grant 221). After 1960, films of similar nature that actively try to emulate the classic noir style (for better or worse) are deemed neo-noir. Both terms imply use of a cinematic style with a particular way of lighting, positioning and moving the camera, and using retrospective voice-over narration (Grant 221).

Speed Grapher is the tale of Tatsumi Saiga, a photographer who gained his fame for his vivid portrayals of every edge of reality during a war but since has had his visa stripped by his country and now takes whatever paparazzi-esque job will pay the bills. He lives in a near-future Tokyo, where the economic climate has brought forth the rise of an all-controlling corporation (The Tennozu Group), which is headed by Shinsen Tennozu but controlled by her boy-toy, Suitengu, and acts as a front for the biggest example of indulgence around: the club. The club is a gathering place where those that can afford it come to engage their various perversions, be they lustful, violent, or some combination thereof. It is also the place where "the goddess" – Tennozu heir and hypnotized 15 year-old Kagura – bestows a blessing (kiss) on special club members that releases their innermost passion. This passion is then used by Suitengu for special jobs that may arise, usually murder. The story comes down to Saiga helping Kagura escape her situation after stumbling upon this club via one of the places for which he works. It is simultaneously the story about Suitengu's past, Kagura's situation, and Shinsen's cruelty.

Anime relies heavily upon translation to interact with audiences of different cultures via two means: subtitled releases (subs) and dubbed releases (dubs). Speed Grapher viewers fluent in understanding spoken Japanese or reading English are subject to only the visual elements of noir, as the subtitles reveal all-too polite/reserved speech that does not carry the necessary sense of desperation or hopelessness. The inferred “you” of the dubbed version translates into subtitles riddled with “sir” and “-san” when characters address each other, making exchanges either far too formal or familiar to be considered gritty; the language is flat, almost factual, with limited descriptors; and there’s a noted lack of the subtlety that gives noir its nuance. However, English-fluent viewers are subject to a much more pessimistic, downbeat, and crass oral experience, a “narrative [that] often relies heavily on flashbacks and choice of setting – usually a seedy, urban landscape, a world gone wrong” (Grant 221). As an example, read the following subtitles to Saiga’s opening monologue:

It’s been over a decade since the worldwide economic 'Bubble War.' Under the banner of global standards, the wealthy grew even wealthier and the poor grew helplessly poorer. The world’s winners gather in Tokyo, where there are no desires that money cannot fulfill. Money, money, money.... As they gained possessions, people also forgot the important things.

Now look at the dubbed version:

It’s been a decade since the 'Bubble War,' when the global economy burst and the insiders who held the needle pulled out early and swooped in like vultures to eat the remains at a fraction of the cost. Welcome to Tokyo, the city where all the winners came to jerk each other off. If you got enough money, you can buy anything your sick mind can dream up. If you don’t, you just try not to get crushed beneath the wheels.

If you want to cite production difficulties, such as lip-flap-matching, to try to explain the difference, it should be noted that the above voice-over occurs during nothing more than a panning cityscape and street scenes devoid of any technical hurdles. There is a decisive effort to Americanize (noir-inize?) the translation for the dub, voiced appropriately here by Washington D.C.-native Christopher Sabat, to “create a specific malaise and to drive home a social criticism,” another noir staple (Silver 373). Such criticism is brilliant as it actually works two ways – accosting the sociopolitical/economic environment of USA and warning Japan about the dangers of succumbing to the influence of outsiders – by using an American style (noir) within a Japanese medium (anime) to liken both cultures. Thus, a true neo-noir environment is only fully realized when the shadowy/dark visuals are combined with the Americanized dub.

Whether it is done via brief exchanges or introspective monologues, “one aspect of film noir which filmmakers have chosen to underscore is its forlorn romanticism, the need to find love and honor in a new society that venerates only sex and money.” (Silver 398). The translation of a quick conversation between Suitengu and Tsujido, in which they are assessing how to deal with the recent Saiga problem, verbally verifies the above statement. First the Japanese translation:

Suitengu: A battlefield cameraman?
Tsujido: Yes. It seems he’s stuck inside the country now, though.
Tsujido: Should we plant some bait and reel him in?
Suitengu: Money has no effect on a man like him.

And the English dub:

Suitengu: A war photographer, eh?
Tsujido: Yes. He’s in Tokyo now, toiling away in obscurity.
Tsujido: Should we attempt to lure Mr. Saiga back home?
Suitengu: There’d be no point. A man like him can’t be seduced by money. 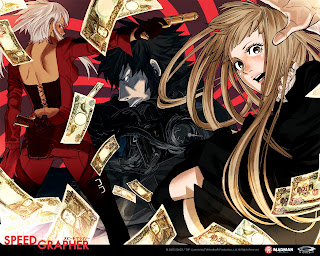 To truly pick apart all the nuance here, the different connotations for words must be observed. “Money has no effect on a man like him” is appropriate, but cliché, and does not fully tie together the sex-and-money mentality so contrary to Saiga’s nature. However, “A man like him can’t be seduced by money” eliminates the cliché while tying in the seedy nature of what’s being proposed. The exchange also serves to highlight Saiga’s desperate situation, or rather his situation of despair in how he is described.

“Battlefield cameraman” sounds more energetic, more action-oriented, than “war photographer.” The former makes it sound as if Saiga is currently in the fray, even though the war he covered happened years ago, and the latter conjures a sense of reflection by mentioning war in general, which puts Saiga in a passive and helpless role. Such despair is further extended when you compare the sub’s trite “stuck inside this country” to the dub’s superior “toiling away in obscurity.” The language is more dense and leaves more of an emotional impact, even though this exchange takes place in a few seconds’ time. The fact that there are no long speeches in this anime actually lends all the more importance to what is said as well as how it is said.

Small lines of dialogue can ruin the atmosphere the visuals are so adept at creating by not matching the tone. It is here where the sense of politeness and place inherent in Japanese culture, stemming from a country-first attitude and the work ethic of tirelessly toiling away under vast numbers of superiors, contradicts the vengeance aspect of noir, the rat-in-a-corner attack on the world that suppresses them. A prime example of this can be seen in a simple line of dialog spoken by a euphoric dentist when coming after Saiga. Explaining what exactly he is doing there, the subtitles read:

Dr. Mizonokuchi: Everyone has been inconvenienced because of you. Accept the consequences for your crime.

And the dubbed audio says:

Dr. Mizonokuchi: You’ve made some powerful people very angry. So they’ve called on me to remove the decay.

Notice the emphasis of the subject of the sentence and the way the implication of threat virtually dissipates in the subtitled version. “Everyone” is a bland and generic term with no specific implications, “inconvenienced” sounds like Saiga spilled some water on the offended party’s pants during a party, and “Accept the consequences of your crime” sounds like advice from a parent or, at the worst, a soft reprimand from a cop- or judge-like authority figure. The dubbed version, however, gets the mood right by bringing in the notion of those in power, upping the ante to “angry,” and using a dentistry metaphor to drill home the doctor’s specific threat of danger while keeping within the overall mood.

Writing is hard work, and not many people realize it. To make a good noir story, it must stay within the bounds of the style it has set out to emulate or break said rules for a specific purpose. Speed Grapher’s obvious noir visual styling vs. horrible writing may be a case of one production team not knowing what the other was doing, incompatible wording, or just plain ol’ bad choice, but it only serves to hurt the overall effect of the series itself. Dubbing is hard work under any circumstance, and much more so when changing/adding so much original content. The adapted writing has to be meticulous, and inserting the full subtlety of noir into a given time/mouth pattern is not a job to be envied even under the best circumstances. Still, the Speed Grapher dub manages to up the noir ante for almost every line of dialogue, from the banal greetings to those that “[transcend] personal and generic outlook[s] to reflect cultural preoccupations” (Silver 398). Without the benefit of the dubbing, Speed Grapher could only qualify as a neo-noir if watched on mute and without subtitles, because the addition of the original Japanese would turn the dialogue into a parody of noir, which was definitely not the intent of the series.