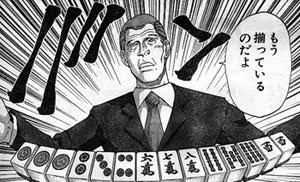 Was Celebrity Poker not enough for you? Do you prefer your major diplomatic decisions to be decided based on Chinese gambling games? If so, then you're gonna love Mudazumo Naki Kaikaku -The Legend of Koizumi. In this mahjong manga written and drawn by gag manga artist Oowada Hideki, world leaders fight it out in the most intense games of mahjong ever played.

Make sure you check out the post, which features quite a few intense, ridiculous, and not altogether flattering depictions of your favorite leaders. Fantastic stuff.

[via Canned Dogs and Japanator]