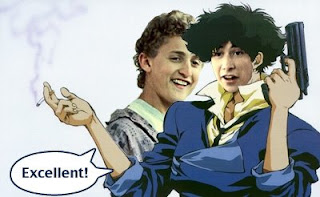 We've all heard the rumors since spring/summer 2008, so it shouldn't come as too much of a surprise that Fox is making a live-action film adaptation of anime classic Cowboy Bebop. However, the part that has caught a lot of people by surprise is the official casting of Keanu Reeves in the lead part of Spike Spiegel.

What's really interesting is that, despite the casting of Reeves (who doesn't have the most sparkling acting resume), most of the upper-level staff who worked on the original anime will be producers and consultants for the Hollywood film. Cowboy Bebop director Shinichiro Watanabe, Sunrise President Kenji Uchida, and original script supervisor Keiko Nobumoto are associate producers on the film, while animation studio Sunrise and their former producer Masahiko Minami will be production consultants.

While we all know the potential of Hollywood studios to ruin beloved franchises, the team selected to help with production seems like they can really steer the film in the right direction. Reeves is of course the most pressing problem for most anime fans, but his casting isn't a kiss of death on the film – after all, The Matrix was great, and Keanu was front and center for that one. If he is directed well, and the film is made with a love for the original anime intact, this can truly be a step in the right direction for Hollywood anime adaptations. That said, I remain cautiously optimistic about it. What do you guys think?