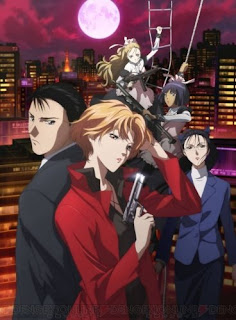 When Tom Jones sang “She’s a Lady,” he was probably singing to this lady.

Ryoko’s Case Files has come and gone, and with the exception of the title character, I may not remember either event. Though light-hearted, episodic and glazed over with an aristocratic and political tone, the only lasting kick is the one provided by Miss Ryoko herself.

Ryoko Yakushiji (don’t try to say it out loud, you’ll crack your teeth) is the superintendent of JACES, Japan’s private, rentable secret police. This means she operates as she wants, without consequence. Debonair, ruthless and classy, Ryoko’s arrogance has major cougar appeal. Using her seemingly unlimited monetary resources and personal connections, Ryoko travels Japan to stir up trouble. By her side, whether he likes it or not, is her self-proclaimed bodyguard/baby-sitter/chauffer/shopping-bag-carrier Jin’ichirou Izudami. Together they solve mysteries of a vaguely sci-fi inclination.

Think of it this way: Imagine The X-Files, but Scully has emasculated Moulder into paying her bar tab, accompany her to pick out shoes, and occasionally shooting a giant snake. Though much of the series is narrated through Izudami’s eyes, his bland characterization provokes no empathy, and his cluelessness doesn’t help the series either. Because Izudami has no idea what is going on, neither do we; but the alternative of being inside Ryoko’s head would be a Lovecraftian descent into unspeakable horror.

The pacing lags in this episodic mystery series, and the romantic interest between Izudami and his boss is a moot point due to her overt nature and his inability to put the clues together: she wants him. The mysteries themselves lack detail, drive and creativity. Sure, it’s a giant snake or a mind-controlling tree (which are cool in and of themselves), but the drama falls dead in its tracks once Ryoko appears, solves the mystery, shoots it in the head, and leaves without any logical explanation.

Ryoko’s Case Files does provide some very funny moments centered on Ryoko’s impulsive, manipulative and subtly risqué behavior. If the rest of the cast could hold a candle to her attitude and fearless arrogance, this would have been a great ride, leaving me waiting happily for a second season. But as it is - a weak mystery show with static characters and an imaginary plot - I remain unmotivated.