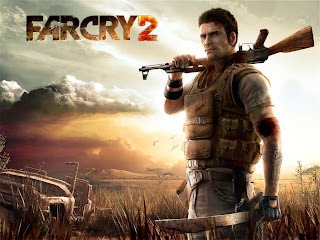 Welcome to our very first "Impressions" post. In this series of features, our staff will briefly tell you their opinion of an anime, manga, or game based on their current impression. They're less like reviews and more like little journal entries, so don't expect fully-formed opinions just yet.

Though Far Cry 2 (PC, Playstation 3, Xbox 360) has been overshadowed by much "bigger" releases this holiday season, a small handful of game journalists have spoken up on its behalf. After hearing Joystiq's Ludwig Kietzmann talk it up for over a month, I figured it was time to give this open-world shooter a try.

No, this is not a continuation of the original Far Cry, so before you ask, you don't need to have played the previous game. In this iteration, you are a mercenary sent to an African country to kill an arms dealer called "The Jackal" who has been pitting the two sides of a civil war against each other. When you enter the country, however, you catch malaria, get caught in a firefight, and miss your chance of catching The Jackal. Now you've got to fend for yourself in this war-torn country while working toward completing your mission.

As far as I've seen in the Xbox 360 version of the game, the open-world design is really working out well. Driving a car around a beautiful African savanna is cool enough, but when guerrillas drive by and start ramming your car, filling you full of bullets, things really heat up. In my first hour or so of play, I was randomly attacked by rebels at least three times, and one time they wrecked my car, causing me to stop and fix it (yes, you have to fix it yourself) before moving on. Another time I decided to hop on a small motorboat instead of fighting, and rode the boat off into the sunset.

It's that kind of visual and gameplay aesthetic that has really made my first hour with Far Cry 2 a great experience: moments of quiet serenity (even beauty), punctured by frantic violence that starts as quickly as it stops. It prompts a sort of gut instinct, and sometimes I find myself driving away before I've even thought about what I've done. Completing the immersion is a minimal HUD, problems like malaria and guns that jam up, and completely interactive environments. Hell, I shot a lantern at a campsite and set fire to an entire field of trees, then sat in my boat and watched the blaze framed against the night sky. That's a real game experience right there.

I'm amazed and delighted at how much thought and passion seems to have been put into the design of an ostensibly trigger-happy game like Far Cry 2. And to be honest, I can't wait to get back to Africa.