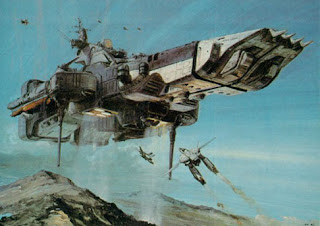 Some very dedicated Japanese fans are preparing to celebrate one of the most important events in world history, an event that changed the course of countless lives for hundreds of years to come – and it never really happened.

That's because in February of 2009, the giant spaceship "SDF-1 Macross" from Shoji Kawamori and Noboru Ishiguro's original Super Dimension Fortress Macross series launched after its ten-year rebuilding period. As announced on the official Macross Frontier website, there will be a completely non-fictional event held in Akihabara, Tokyo to celebrate the fictional launch of the fictional spaceship. The event, which has been given the superfluous title "Macross: The Super Dimension Space Launching Ceremony ~It's Really 2009 Already…It's 2/22 (Nyan Nyan Nyan), Deculture!~," will feature guests from all over the world of Macross – yes, real guests like animators and voice actors.

Hey Japan, in case I haven't reminded you in the past couple of months... you're totally crazy, okay? First you have a funeral for Raoh of Hokuto no Ken, and now you're celebrating the launch of a fictional spaceship? You're crazy... but we love ya even more for it, kid!